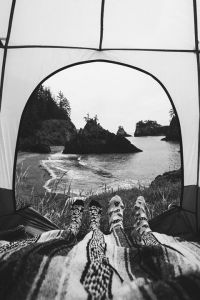 “Paulie? The others will be here soon.”

I felt his shoulders tighten. Lying side by side inside the tent, even though we were fully dressed against the chill and not actually, actually touching, was intimate in a whole new and torturous way.

He sighed. “It’ll be dark soon, Matt. Abby doesn’t like driving in the dark. And Eddy’s never been keen on sleeping outdoors. And everyone else… well.”

“What do you mean?” Did he think this was my fault? I’d left messages for our gang about the when and where to meet. Bloody irritating that so many of them had turned off their phones.

There was a growing knot of panic in my belly. “What’s going on?”

He didn’t answer me directly, but shifted slightly on the blanket and his hip nudged mine. “Look at that view. Isn’t it fabulous?”

I gazed out of the open tent flap at the gently lapping river, the lush grass stretching away from our feet, the rocky island tops peeking from the water like benign sea monsters’ woolly hats. It was fabulous: that’s why I’d suggested it as a venue in the first place. And made sure I got our tent pitched in the best place, before anyone else arrived.

When he linked his arm in mine under the covers, I nearly yelped. Paulie’s easy confidence was everything I’d ever dreamed of, but rarely managed on my own behalf. Astounded at my courage, I slipped my hand into his: interlinked our fingers. I was startled to find he was gently shaking.

“Tell me.” The boulder of panic in my gut was crumbling into a scatter of smaller, anticipatory aches in my groin area. Dread was changing into desire.

And hope that made me stupid.

His socked foot rubbed against mine, and his voice was shaky. Paulie Richards, out and proud, tough and bright and so hugely popular, I’d never considered I had much of a chance—was he really, actually nervous?

“Don’t be angry, Matt. You’ve been set up: we both have. No one’s coming until tomorrow.” He blushed: I could feel his hot cheek against my ear. “The gang insisted. To give us a night to… you know. Get to know each other better.”

“I’ve known you since you were twelve, Paulie. We were at school together.”

He tensed again. “Way to make this more difficult, Matt. So maybe I misread things. Maybe everyone did. Maybe you’re not interested in me after all, that way, and I should stop mooning over you like I have for years, while all you wanted was to play football, and watch Fast and Furious with pepperoni pizza—”

I turned my head and kissed him. It took a long, lovely, astounding, warming, exhilarating, time.

“Get to know each other better, you say?” I whispered. His eyes were wide and he was grinning, reaching for me. “So shut that flap and let’s get properly warm.”