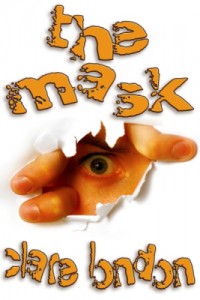 There’s a mixed reception for Joey and his friends when they go trick or treating at the exclusive Grosvenor Square Hotel — everything from hostility to humour to handfuls of caramels. They’re a motley crew — a swamp monster, a vampire, a red devil, and a ghost in a less than flattering sheet. Joey’s costume is uncomfortable and daft, his friends are unruly, and he’s tired of everyone dismissing his best friend Gaz’s awkward stutter. The novelty of the quest soon wears off.

But when Gaz goes missing, Joey learns some home truths about his apparently shy friend. And when they knock at the final door, a horrific masked figure tricks Joey into finding maybe the best treat of all — that romance has its own, often startling disguise.

The man at number 603 laughed – loudly and rudely – at our costumes, and slammed the door in our faces. Cody and Bren laughed back: Vince frowned.

“Pathetic,” he drawled.  “Total lack of community spirit.  You think I might find some outstanding traffic violations on him I could resurrect tomorrow?”

“I could punch his lights out,” Bren announced, enthusiastically.

I rolled my eyes.  Things weren’t progressing exactly as I’d planned, and we’d only just started.

“Not now, Gaz,” murmured Cody, absently, interrupting him.  There was a glint in his eye.  “Leave this to me.”  On red-painted, perfectly-formed legs, he marched to the next door and hammered on it.

The family at 609 had a puppy, and it leapt up and bit Cody in its ‘youthful enthusiasm’ – or so the kids there insisted.  They looked to be on their own, and were obviously terrified that someone would come and take it away.  Bren muttered it was highly likely this’d been suggested before.  Vince was cowering in the corner of the corridor, avoiding the whole debate, blaming his allergies.  Cody was hopping up and down, cursing all pets and children alike, his tail whipping across his buttocks like some BDSM session on auto-pilot, and looking like he was about to vote for ritual dismemberment of the beast.

Gaz helped me catch hold of the bouncing puppy and we shooed it and the kids back indoors.  Homicide – or puppy-cide, for which I was sure only Cody would know the correct word and I wasn’t asking him right now – was circumvented.

“Joey.”  Gaz sounded very muffled inside his sheet but I put an encouraging arm around his shoulder regardless.  He made a strange, gasping sound.  “I’m t-trying to tell you, I c-could…”

“Not now, Gaz,” announced Vince, pushing to the front with a flamboyant sweep of his cape.  “I’ll take the next one.”

The attractive young woman at 611 certainly gave us more civil attention than anyone so far that evening.  She looked us all up and down very slowly, then she handed me a whole bag of assorted sweets from one of the more exclusive city retail stores.  Cody started peering inside to check for caramel, and Bren looked as flushed as if he were twelve all over again.  I was just beginning to thank her when she turned away from us all very deliberately and concentrated on Vince alone.

While we watched and listened, open-mouthed – except for Cody, who was chewing three caramels all at once – the young woman proceeded to open her robe wider than anyone’s modesty should ever allow, and offered Vince a night of Treats of a very different kind.   From overly full, collagen-injected lips issued a catalog of suggestions that had my ears turning pink, Cody tipping his head sideways in interest, and Bren taking surreptitious notes.  She was interested in investigating several different positions, she said; utilizing many different accessories.  He was the kind of handsome, confident guy she was looking for.  She was most frank – and most insistent.

Gaz coughed in distress beside me.  I suppose my words could have been ambiguous.

Vince looked sorely tempted, that was the problem.  It took me and Gaz a couple of hard kicks to get him moving along the corridor again.  Bren was still looking a bit stunned and his mouth was moving slightly as he tried to remember some new words for future reference.  I noticed Cody had tangled his hand in the tentacles around Bren’s butt, and was stroking possessively.  Their eyes met and Cody grinned.  The red fingered devil and the green scaled Swamp Monster made for an interesting sexual concept, I thought.

“Anyone think to ask which suite Johnny Depp uses?” I sighed, more from hope than expectation.

“Hey,” I said, suddenly quite sharp myself.  “I think maybe you should all lay off Gaz like that, you should let him get his piece said.  In my opinion, he always has plenty sensible things to offer –”

Bren strode past me, emboldened by Cody’s feeling him up, and ignoring every word I said. “My turn, everyone?”

Things went from the bizarre to the brutal.