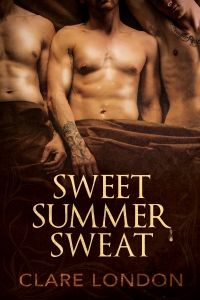 When you find a place where lust and sex rule life, and your every desire can be fulfilled, why would you ever want to leave?

Young runaway Scot and his boyfriend Jerry escape their deadbeat homes and families, hoping to leave prejudice behind them and travel to a new life in Las Vegas. Unprepared and naive, they’re lost almost at once, and shelter at a run-down, deserted motel in the middle of the scorching hot Nevada desert. A place with secrets, run by staff both gorgeous and uninhibited, and driven by a mysterious sexual connection Scot’s never even dared to dream.

All but drugged by the lazy heat and the hedonism around him, Scot watches as Jerry is seduced away and realizes their relationship was nothing more than shared lust. Restless, Scot knows he wants true love and real understanding. Could he find it with the mysterious and elusive owner of the motel, Connor Maxwell? Connor seems to think so, every time he appears and pursues Scot for his own. But where does Connor come from? It seems the passion calls him into being at its own whim.

Eventually, what binds Connor and his friends to the motel may be too strong for Scot to break through. Scot has ambitions to travel, to make something of his life – but is his only option to embrace life at the motel in his true lover’s arms?

Or will that love be strong enough to release them both …

Buy here: Amazon | Available to read in Kindle Unlimited
Add it to your Goodreads here.

Scot stared into Oliver’s face, meeting the young man’s gaze. It was calm and steady, but the pupils of his eyes were dilated. And as Scot watched, he saw gentle movement around the waist of Oliver’s shorts, as if the back of them was being tugged down: as if there was something being slipped inside. He thought it was probably Vincent’s other hand. He could see more of Oliver’s nude hip now—more of his pale, young skin.

Oliver sucked in a breath, his eyes still holding Scot’s gaze. Another slight smile teased at his lips. The tip of his tongue appeared suddenly, rubbing quickly across the pink flesh of his mouth, then darted back in. His head fell back a little, and bobbed gently as if controlled by an invisible puppeteer’s string.

“Shit.” Jerry gasped, his voice hoarse. He slipped his hand off Scot’s arm. Scot couldn’t fail to see it slide down the front of Jerry’s body, and he marveled that Jerry would touch himself in front of others. His own cock ached, pressing against the front of his jeans, but he didn’t dare reach to adjust it.

Oliver apparently had no such inhibitions. As the movement in his shorts became more pronounced, his hand slipped into his lap, resting on the bulge that anyone could now see under the denim. He sighed again softly, biting at his lower lip as if something were nagging at him. And then, in front of the two spectators, sitting as he was on the desk with Vincent’s hand down his shorts and obviously up against his ass, he started to rub at his arousal.

The attraction was obviously mutual.

Oliver was panting softly now, but fast. His eyes were unfocused. He slipped the buttons of his shorts and his hand dove inside, clutching the shape that strained the fabric at the crotch, his fiercely erect cock. Scot could see the shaft of darker flesh slipping through Oliver’s fist, the top of it glistening with drops of slick pre-come. Oliver pumped it roughly, licking his already moist lips. He leaned forward again, allowing Vincent more room behind him. His hips thrust gently in counterpoint to the rocking hand that was now so obviously up his ass and probing for his sweet spot. Scot watched him turn his misted gaze toward Jerry, and smile at him. Looking back at Scot, he opened his soft, lush mouth, as if to speak.

And then a bell rang.