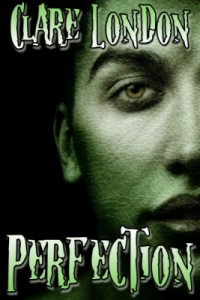 James is surprised when co-worker Vic disappears, but even more so when Vic shows up months later as James’s manager. As a single gay man with few responsibilities, James takes his fun wherever and whenever he can. He’d even played around with Vic a few times. But now something’s changed, something James can’t quite put his finger on. In fact, almost everything about Vic is subtly different — and maybe not so subtly, when it comes to them resuming their affair. James never used to think Vic was hot, but now Vic’s like a new man and he wants James. James should be flattered, shouldn’t he?

Unfortunately, things don’t develop quite the way James hopes. He’s just out for a good time, but Vic wants something more than mutually satisfactory sexual games. He’s obsessed with finding out James’s idea of a perfect man. And what’s more, Vic seems determined to do whatever’s necessary to become that person — whether James is a willing participant or not.

True love is, of course, only found in women’s magazines, and commitment and monogamy should be treated with the appropriate contempt. Right? So, I like to party and to have friends around and yeah, I like to play. I’m young and cute enough and free from responsibility. I mean, I’m always careful, always insist on protection. But if there’s an opportunity for fun, I take it. And preferably more than one.

Vic turned into an opportunity after one of the branch celebrations. I can’t remember what the occasion was–maybe a birthday, maybe a promotion–but we need plenty of relaxation from the stress of our job, so we make the most of any excuse to go for a drink after work. We live in a young city, full of college types, and there are always plenty of places to go to lose yourself in a lively crowd. There are also plenty of good looking boys to look and smile at. Many of them are for touching, too. And I don’t mind telling you, I’ve never had any complaints.

Anyway, that night I suddenly found myself fascinated by Vic. It was pretty clear to me by then he liked me that way; he’d never made a secret of it, his eyes always following me, his hand brushing against me too often to be accidental. I just wasn’t sure I liked him back. You know–in a fuckable way. Oh, he was young and fit enough, and he could look quite sexy when he dressed carefully and let that secret mischief lighten his expression. But there was always something unsettling about him. And, of course, he didn’t really meet my ideal criteria, did he? The criteria that the two of us had laughed about many a time. Unlike the porno, god-like surfer of my dreams, Vic was dark-haired, dark-eyed and he was plump, his belly spilling out over his belt in a shapeless cushion under his shirt. Rather far from my perfect man, even if that was just a joke.

But we’d all drunk a hell of a lot that night. I was between lovers and feeling neglected, and Vic was damned attentive. By the end of the evening, I found myself very keen to feel his hands on me. When I stumbled against him on the way to the restroom, he pressed back and I slipped an arm around his waist. It went from there. I pulled him into a cubicle with me, locked the door and we fumbled around a bit. His mouth was damp and soft but very receptive. He took in my greedy tongue and sucked on it eagerly.

“Sure,” I said, kissing him again. “Me too.” I pulled my shirt out of my trousers and unzipped. His eyes widened. I caught his wrist and pushed his hand down inside my open fly. “You want to do this, Vic?”

He nodded, breathless from more than my tongue thrusting in and out of his mouth. I wondered if he’d ever done this before, but he seemed keen enough. I rubbed myself up against his palm and he soon got the gist of what to do. When I’d got him going in a good rhythm, I fumbled with his zip as well, and plunged my hand in to return the favor. We pumped each other for a good minute, the drink numbing me a bit, but the excitement of a new lover more than compensating.

Everything was very fast after that. When I came, I shuddered and dig my fingers into his shoulders. I was obviously too rough because he yelped aloud with pain. Someone turned off a tap out at the sinks and hurried out of the room. I laughed softly. It took only a few more strokes to bring Vic off, too. It was weird to watch him come: his eyes rolled up rather alarmingly and he whispered some strange sounds that weren’t only versions of my name.

Afterwards, we stood panting, leaning against the walls of the cubicle and mopping ourselves up with toilet tissue. I caught his eye and was pleased to see excitement there, rather than the embarrassment I’d dreaded. He looked ready for more.

“I can’t take you to mine,” I said. It was my roommate’s turn for entertaining that evening. I wondered where Vic lived; what sort of place he’d have. But he was shaking his head as if he also couldn’t offer anywhere comfortable to go.

How lunatic was that? I must have been drunker than I thought.