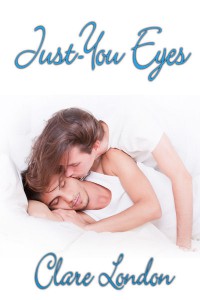 Elliot didn’t know that offering to help his sister get over her broken love affair would mean attending a speed-dating evening at the local hotel in their quaint English town. Obviously, as a gay man, he’s not the target group, and there’s nothing for him there except cheap wine and uncomfortable chairs.

But when hotel manager Alexsy sits down opposite him and offers an evening of a very different kind than Elliot expected, Elliot’s tempted to try something for the very first time in his life—the tantalizing adventure of a one-night stand.

Note March 2019: this title will be returning to me from the publisher at the end of the month. Temporarily, it won’t be available for sale. However I plan to have it re-issued in the next 3-6 months.
CONTACT ME if you would like to buy a copy direct.

“So tell me about life in London. In the big, bad city.” My words were a little slurred. Maybe the brandy was having more effect than I thought. “You work hard, you said. I’m sure you play hard as well.”

“I’m sorry,” I said, irritated. “I know it’s not the most original conversational gambit.”

“I don’t know!” He tilted his head to one side. “But I can see the questions in your eyes. You won’t offend me, Elliot. Ask what you like.”

“I suppose you’ve had plenty of….” I couldn’t do it. I couldn’t finish the question.

Alexsy laughed again. There was a teasing edge to his voice. “Boyfriends? Lovers? Sex?”

“Please.” The tops of my cheeks flamed, I could feel them.

He just grinned. He seemed to have relaxed as well since he’d started drinking the brandy. “Your face! I’m not trying to embarrass you, Elliot, but are you so easily shocked?”

“No.” It felt more like confusion by now. “I’m just not used to talking about it so openly.” With a near stranger.

“I’ve had boyfriends, yes. Of course. And plenty of sex. Maybe a lot of what you would call one-night stands. They’re good for what they are. Fun, delightful and usually very brief. No strings, as they say.”

Alexsy frowned. “You manage your expectations.” His gaze met mine, eyes clear and suddenly very knowing. “It’s a risk but it’s an adventure too. And maybe it is an option when you’re not sure what you’re looking for.”

Was he talking about me?

He leaned forward even farther, and I watched as his hand slid down the inside of my arm and on to my chest. His palm rested against my nipple. I didn’t push him away. My heart started to beat so fiercely I expected his whole arm to shake with the vibration. “You should try it, Elliot,” he said, his voice low and slightly hoarse.

Was this a joke? What did he mean? “Maybe I should,” I said. I was ludicrously proud my voice didn’t break up. “Managing expectations, right?”

“Right.” He didn’t move his hand. In fact, he pressed farther, moving gently against my breast as if he was massaging me. The warmth of his palm was astonishing, even allowing for the fact I felt hot all over. I found myself leaning forward as well, my eyelids heavy with something more than the smoky seduction of the drink. Our faces were only a few inches apart. What was going to happen? Was it going to happen?

“May I give you an example?”

He drew in a soft breath, the sound like a further caress. “Look at us. We’re both free. We both have time. I’m sexually active and so are you. You like sex.”

“Yes.” God, yes. I’d have thought I was broadcasting it all through the room, though maybe he had no idea of my dry mouth and the urgent ache in my groin.

I thought for a second my heart had stopped with shock. It stuttered, and life went on regardless, but a thread of sudden, fierce bravery flared inside me. “Yes,” I said.

“So that’s how it would be,” he murmured back to me. “Just like that.”

His hand moved up from my chest, the fingers trailing until they rested against my jaw. “You have your own life. You’re cautious of more commitment. That’s understandable. And maybe you have Effie to think of, as well. Yet sometimes you need a f—” He was obviously about to say something blunt again, but maybe the shock of his last example still showed on my face, because he bit back the first choice of word. “Friend. Intimate friendship, in bed. Some uninhibited fun.”

“Uninhibited fun.” Repetition seemed a safe bet. I reached out and slid my hand around his waist. The fabric of his shirt creased under my fingers. I tried to imagine the delight of the taut skin underneath, the pulse of flesh against mine, the taste of another mouth, the touch of another body. It had been many months since Bernie left, but not so long I couldn’t remember how sex felt. It just all seemed very different, here with Alexsy.

He shifted on his chair, hitching himself nearer. “Elliot.”

“No strings, as they say,” I whispered.

“No, no strings.” He brushed his lips against my ear, barely touching. Somehow it was more exciting than if he really had kissed me.

Which I realized I wanted him to. Very much.