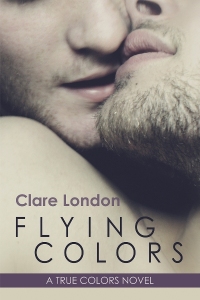 This is Book #5 in the TRUE COLORS series, but can be read as a standalone.

Red De Vere appears to have everything—good looks, a prestigious job, attention from the paparazzi, and a choice of lovers. But one day he takes an outrageous step too far at a formal embassy dinner, and the press turns on him. Shocked, he realizes it’s time to find something better in life than partying. He envies the love that his friends Miles and Zeke have, and when he dares to consider that possibility for himself, his hopes and desires rest in his quiet, serious friend Carter Davison.

Carter loved a man who cheated on him, then died violently, and he refuses to make himself vulnerable again. He knows Red is interested; Red has been supportive and admiring since they met. And Carter’s honest enough to admit he’s attracted to Red. But Carter can also think of nothing worse than being the lover of someone in the public eye. Playboy Red must stay an attractive friend, that’s all.

While Red yearns for something real, Carter has some sweet, sexy secrets that might surprise even Red. If Carter dares emerge from his shell, and Red pursues a more rewarding path, romance could spark. Then there’s no telling what might happen.

Red De Vere leaned against the wall inside the toilet cubicle and cursed aloud. With enthusiasm and deep feeling too. But it wasn’t as if anyone was going to hear him, was it? He was several corridors away from the Hilton’s function room where the official dinner was being held, and he’d made sure this particular gentlemen’s cloakroom was empty before shuffling inside. He’d also called in his current personal assistant to run interference. PA-Tim (as Red referred to him privately, to differentiate him from PA-Ben or PA-Che or PA-Kai, all of whom had worked for him in the past) had been dispatched to find a “Cleaning in Progress” sign, or to block the entrance to the toilets some other way, then to go searching for whatever else Red needed. Red glanced down at his tall, lean frame. His naked to the waist frame.

And what he needed was a clean set of clothes, wasn’t it?

His suit jacket, silk shirt, and tie lay in a sodden heap on the tiled floor. He nudged the pile with his boot and something squelched. Shit. Slowly, he toed off his boots, then bent and rolled off his socks. He’d always liked these boots, but he doubted the leather would survive such a misadventure. How the hell had the stuff reached all the way down to his feet? It’d be one of those mysteries of the universe, he supposed, like a dropped piece of toast always landing butter-side down. He wriggled his toes, profoundly grateful that the toilets were kept spotlessly clean. He didn’t relish padding about in the remnants of anyone else’s bad aim.

Enough of the toilet humor, Richard, his father would have said with a frown. How apt was that in this situation? Red couldn’t resist a private grin. Since the first teenage step of changing his name to Red, he’d taken nothing but pleasure in goading Alexander De Vere as much as he dared—and often beyond.

He glanced at his watch, glinting gold against his evenly tanned wrist. The room was warm enough, but a shiver of goose bumps ran across his bare shoulders. What the hell was PA-Tim doing? Shopping for the damned silkworms? All he had to do was talk to the hotel staff to help out. Or, to be more discreet, he could have taken a cab back to Red’s flat in Chelsea and picked up another suit there. It wasn’t far from Kensington. Red had hired and fired a good many PAs in his time, and none of them seemed quite up to the job. Maybe it was because Red never really specified what the job was: or maybe it was because no one in their right mind could keep up with him.

Red shifted awkwardly and sighed. The fabric of his bespoke trousers clung to his legs, clammy against his skin. It was no good; the rest of his clothes would have to come off as well. He started wriggling them down his thighs, the waistband of the briefs catching on his hip, the hems of his trouser legs tangling around his ankles. He banged his knee on the wall and narrowly avoided the coat hook on the back of the door gouging out his eye. More cursing, and more colorful this time. He could have waited by the urinals, of course, but it wasn’t every day he found himself stripped in a toilet—not these days, anyway—and he felt somehow safer inside the cubicle.

For God’s sake, what was he? A child?

When he heard a tapping sound outside in the corridor, he eased open the toilet door and stepped out on the luxurious—and much warmer—carpet. “Tim? Is that you?” Silence fell again. Of course, one of the things you could always rely on at these embassy events was the supremely civil and quiet behavior of the guests. That’s why it had been such a shock when the young woman had thrown up all over him. She’d looked so shocked and horrified, Red had just pulled the hem of his jacket over his lap and made quick excuses to go and freshen up. He wondered if anyone even noticed he’d gone, taking the smelly, unpleasantly textured evidence with him. Red hoped someone was looking after her too. Her skin had been too pale for the sickness to be just the effect of rich food or exorbitantly expensive wine; she’d looked drawn and ill.

Red glanced around at the elegantly wallpapered walls, the gilded light fittings, and the gilt taps. No expense spared, even in here. He caught sight of himself in the mirror over the sinks, and paused. Someone else looked drawn too, and not a million miles away. His blond hair had started the evening immaculately styled, as always, but now a couple of sweaty locks were stuck to his forehead. His cheeks were flushed from faster breathing than usual—not surprising, after this little drama—but that couldn’t hide the slightly hollow effect of too many late nights and excesses embraced. But he looked all right otherwise, didn’t he? A little self-consciously, he turned from side to side, peering at his body’s reflection within the mirror’s discreetly etched border. He was lean and well toned rather than muscled, because he never had the patience to spend much time in the gym. But he rode often, and played sports when he could find the opportunity. Presumably that was enough to keep him fit—and fit for anything, as well. His face might be pale but the skin was still good, reflecting the fact he had the money to live well. He was well known for his partying habits, and infamous in the gossip papers for his over-indulgence of food, drink, and the occasional mood enhancer. The tan on his upper body was natural, from skiing and time spent in the Caribbean. And if his gaze drifted lower… well. He’d never had any complaints with the lower half, either.

Dammit! He shook his head. Wasn’t appearance just an accident of birth in the end? He couldn’t help the fact he carried the genes of his handsome, aristocratic English father, blended with the exotic good looks of his Texan mother, even if he deliberately made the most of it. Did that make him a hypocrite? And why the hell was he indulging these thoughts right now?

His gaze was drawn back up to the frown line above his patrician nose. He was concerned about that young woman. Was she part of the embassy staff or a guest’s companion? He’d been so eager to get the mess out of the dining room swiftly, he hadn’t had the chance to check on her. His clean clothes needed to arrive bloody soon, and then he could get back to the dinner.

There was another tapping noise, this time at the door. “Tim?” Red padded on his bare feet over to the door and leaned an ear against it. For a second, he was overwhelmed with the desire to laugh. What must he look like? Naked, in a gentleman’s toilet so smart it was better than his own one at home, with surfaces so white and polished their reflection hurt his eyes, surrounded by the rich, pervasive aroma of vanilla-and-musk air freshener, and battling with the stench of red wine vomit all over his clothes. Leaning against the door like some eavesdropper….

And surreptitiously sniffing his skin for traces of that vomit.

God. Red straightened up quickly, shaking his head, even though there was no one to see it. He hoped PA-Tim had brought toiletries as well. Would the guy have the initiative to think of that? Red knew he’d need a quick wash down before he pulled on fresh clothes. He wondered if he’d missed any critical discussions over dinner—so many decisions were made over the beef Wellington rather than the board table. And there was probably no dessert left by now. He’d been promised baked Alaska and the best English cheese board in the city, and he damned well deserved them both.

Red frowned, leaning closer. That definitely sounded like PA-Tim—just the right blend of nervousness and devotion. He cracked open the door. There was Tim, over by the far wall, eyes wide, lips pursed. His fair, new-graduate-bland face was white to the gills, and he clutched a pile of laundry bags to his chest. His mouth opened as Red caught his eye, but Red couldn’t hear him—

Because any speech was drowned out by a sudden burst of voices, a whole group of them, different tones, different pitches, but all rising in volume and unmistakable urgency, swelling from a thrust of bodies clustered around the toilet door.

Startled, Red relaxed his hold on the handle, and someone on the other side wrenched the door fully open. Red De Vere stood there, bare, transfixed, temporarily without even the nous to clap his hands over his genitals. The babble of noise couldn’t hide a ripple of crude, victorious laughter. And the corridor was immediately filled with the white light of snapping cameras.

That was the other thing you could always rely on at embassy events, of course—the paparazzi being out in force.