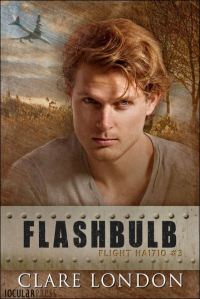 Blythe Harris was taking his first flight to the USA and hopefully a whole new client base for his bespoke upholstery business. An adventure for him, he was both nervous and excited to attract the attention of a handsome steward. Things might have gone further – if Flight HA1710 hadn’t failed.

Marc Stafford is a self-confessed player, and he used his charm to seduce his cute passenger. But in the aftermath of the crash, he’s struggling to recover his confidence. The TV declares him a hero for saving passengers, but at night his nightmares trigger painful flashbulb memories of the crash.

In an Irish hospital, Bly realises that although his broken leg will recover, his career may not. And in Chicago, Marc can’t face returning to work. Neither of them can shake off the memory of their brief, sexy encounter. Both of them need to be with someone who understands exactly what they’ve been through. And on a middle ground they can make all their own.

This story is part of a series about Flight HA1710, with other stories contributed by RJ Scott, Sara York, Meredith Russell, Serena Yates and Amber Kell. Find all the details HERE.

Bly closed the front door behind him and Marc, leaned against the door frame, and took a long, slow breath. Part of it was to recover after his walk back to the house. Part of it was to settle his continuing excitement at the man beside him all the way

What a bloody shock it’d been! To see Marc on his doorstep, after all those weeks of thinking about him – and assuming he’d never see him again. And although Marc had been weary and dishevelled, he’d been as handsome as Bly remembered. Not only that, but the physical nearness was far more vivid than his dreams could be. With the smell of Marc’s cologne in his nostrils, and the easy masculine grace of his limbs as he leaned over the table, or walked across the room, or sat next to Bly with his long-fingered hand on Bly’s…

It wasn’t possible, was it? To feel so close to someone when you didn’t know anything about their family, or where they went to school, or how they voted, or what they liked to watch on TV, or whether they laughed at satire or slapstick. All on the basis of a few minutes of banter, a shared smile, and a quick, dirty, supremely thrilling hand job in an airplane toilet. Bly supposed he should just consider it as healthy lust – but something told him he’d be selling it short if he did.

“We never got anything for lunch,” Marc said, breaking into Bly’s reverie. “You hungry?”

Marc gave a small, quirky smile that showed he knew the Britishism. “Good idea. I’ll take a coffee if it’s on offer.”

Bly kept himself occupied with making the drinks, while Marc hovered in the kitchen doorway as if looking for something to do. Bly handed him his mug of coffee with a grin. “You’re off duty, you know. It’s my turn to serve the refreshments.” He could see the joke had gone awry almost immediately. Marc’s smile in return was strained, and his eyes narrowed with pain. Bly would have apologised, if he’d known what he was apologising for. Instead, he nodded them both through to the living room. It was sparsely furnished – Maura’s sister and brother in law were newlyweds and short on funds – but the sofa was a comfy secondhand. There was another armchair in the corner by the TV, but when Marc sat on the sofa, Bly went and joined him there without hesitation. He carefully parked his mug of tea next to Marc’s on a small foldaway table that held a small pile of books and a reading lamp.

Marc leaned forward, elbows on his knees, and wiped his hand over his face. Every movement showed his weariness, and he didn’t make any move towards his coffee. “I meant it, about going back to the US. Believe me, I understand what a dick I’ve been. I don’t know what the fuck I was thinking, just turning up.”

“And I meant it about you staying on.” Bly impressed himself with his firm, calm tone. “It’s not a problem.”

“Look, don’t get me wrong.” Marc looked wretched now. “You’ve been the good guy. But this was a mistake. All mine.”

“A bloody expensive mistake,” Bly said smartly, almost enjoying the brief confusion on Marc’s face. “And you were sure last night you’d done the right thing, weren’t you? So don’t talk any more crap. I just wish you’d tell me what’s troubling you.”

“Marc.” The bloody man wasn’t used to talking seriously, was he? Bly tried to gentle his voice, not sure whether Marc needed pushing or cajoling. “You told me you had nightmares. You asked me if I thought about the crash. Yes,” and he repeated it, “the crash we were both in. Seems to me you don’t want to face it, but that doesn’t mean it didn’t happen. I’ve told you what happened to me, how I’ve been affected. Don’t you think it’s fair for you to do the same?”

Marc’s eyes were narrowed, his expression stricken. “I want to…” Then he seemed to change his mind, his doubt reasserting itself. “Bly, I really like you. But I barely know you. You barely know me.”

“Right.” Bly tried not to be offended. He knew Marc was struggling with opening up: he wished he knew him better, knew if now was the time to push. “But things might have been different between us, if things hadn’t been taken out of our hands.” His cheeks heated with the memory of Marc’s tongue in his ear, their shared, shocked laughter. Marc’s hand, firm and greedy, stroking his cock. “We both wanted more, right?”

He’s remembering too! “And we were getting on well. We would have made that date for a drink, I know we would.”

Marc’s eyes met his. There was an unidentifiable look in them, but they were softer than before. “I know that too.”

“Now, perhaps, we can start again.”

The room slipped into silence. Marc was restless, Bly could feel it. He wanted to put his arm around him. Actually, he realised with some amazement, he wanted to put both arms around Marc and pull him very close, and hold him until he calmed. Then kiss him. For a long, long time. Oh God. That worry about feeling close to someone so soon? Bly thought he’d probably just strayed from the theory into very definite reality.