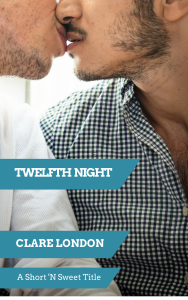 BLURB: Caleb’s meant to be clearing away the Christmas decorations for Twelfth Night – Owen just wants to play video games. They’re content together, a well established couple, who may even let that content drift into something sexier, in the comfort of their dimly lit living room. But now a mysterious, late Christmas present has arrived for Owen….

EXCERPT:
He picked up a slim parcel that lay on the side table. It was wrapped in gaudy Christmas paper, secured with shiny ribbon. He didn’t think Owen had noticed it yet. Maybe he’d interrupt him at some convenient time in the next hour. Caleb didn’t mind waiting.

“Who’s that for?” Owen’s voice broke into his thoughts, a warm breathlessness in his tone. “Did we forget to deliver something?”

Caleb started slightly. “The gift? It’s for you.”

Owen paused, the game frozen on screen. He turned slowly to look at the man sitting on the sofa beside him. “From you? We exchanged presents days ago.”

Caleb shrugged. He liked to watch Owen’s pupils as the dilation gently faded—as his mind returned to the real world of their apartment. “It’s not from me, I’m afraid. It just arrived today, pushed through the letterbox. I assumed it was delivered by hand, and it has your name on it. But there’s no return address or name.”

Owen was staring back, his eyes warm with the diffused light, his mouth widening in a grin. Caleb was gratified that his lover gave him the same full attention as the precious game. At times like this, he’d learned that his own entertainment value was much less rewarding.

“So—some kind of Secret Santa gift, then?” Owen laughed: a rich, seductive sound. Caleb found himself smiling back. It was like sinking into something warm and bubbling, something that tugged at the pit of his groin and promised amusement beyond humour.

“I don’t know,” he replied. “I don’t really understand the concept of that. I think you should always know who to thank.”

Owen laughed again, and stretched his arms above his head. He yawned.

Caleb watched Owen’s throat bob as he swallowed; watched the clench of muscle along the inside of his arm. His lover leant back on his hands, the console resting idly on his lap. “The game isn’t finished,” Caleb noted.

Owen nodded and smiled. “You know it as well as I do, I reckon. Why don’t you ever play?”

Caleb shrugged. Owen’s eyes flickered over him like the fantasy warrior figures had darted across screen only moments ago. “It’s not my kind of thing. I like to watch you play instead.”

Caleb paused, then found words to weave around his feelings. Owen asked this of him, sometimes. “You’re exhilarated, enthralled. Your mind is a blur of energy yet your body is coiled with tension into one single place, one solitary position. You’re absorbed into a fantastic realm of aggression and power, both sought and abused, yet you can return to reality in a second.”

He saw Owen watching his mouth, as if memorising his words, or maybe turning them over to see how they might feel in his own mouth. Owen wasn’t a casual chatterer, like Caleb; words from him were sweetmeats, candies, treasures. Caleb felt proud whenever Owen returned his words with his own.

“You’re right,” Owen said. “It’s my escape. Exhilarates me, like you say.” He leaned towards Caleb, the cushion shifting with his weight, his body heat moving into the space between them. His eyes darted to Caleb’s face then away again. Caleb saw the mischief in them. “It excites me, too. You know that?”

“Yes, I know that.” Caleb was close enough to see the bead of sweat at the base of Owen’s throat. Owen’s lips were moist from regular licking and laughing. When he leaned in and took a swift, sweet kiss, Caleb felt his vision slip askew.

“It makes my heart race,” Owen whispered. His mouth ran along Caleb’s jaw, his lips pausing by Caleb’s ear. “It makes my muscles ache with tension. It makes my dick throb with a frustrated thrill. How the hell can I play on like this?”