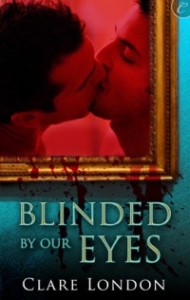 London art dealer Charles Garrett has devoted his life to appreciating and acquiring beauty, both in art and in his companions. His fashionable life is rocked to the core when he discovers the body of a young artist, Paolo Valero, in a pool of blood in his gallery.

As Paolo’s mentor, Charles is haunted by the horror of his violent death. Seeking closure, he investigates Paolo’s past and soon discovers a tangled web of motives and potential suspects, some closer to home than he ever imagined. He’s drawn to Antony Walker, an aggressive, handsome sculptor with unsavory ties to Paolo. Charles is unsettled by Antony’s forceful nature but irresistibly attracted to his passion and his art.

When the evidence points toward Antony’s guilt, Charles is thrown into emotional turmoil. Has he lost his heart to a killer?

The sound of a man crying was the first shock. Deep, racking sobs echoing off the smooth walls of my showroom. The whole gallery was usually deserted and cool at this late hour, despite the urban truth that London never slept. Yet tonight something in the air resonated with tension. And huddled in the far corner was a slender, pale young man. Arms clenched around his drawn-up knees, his eyes hot and wet, staring at me through a fringe of bedraggled dark curls. He looked angry and scared, and for the first few seconds it was all directed at me.

Without thinking, I dropped my bag. I heard the thump as it hit the floor.

I’d never seen anyone who wasn’t a woman cry like this. The sound was strange, astonishingly loud and ugly, his breath rasping with each hiccup of anguish. His shoulders rose and fell awkwardly, the bones a shadowy silhouette under the thin fabric of his shirt, his knuckles white against the black fabric of his jeans.

How beautiful he still looked, how miserable yet how utterly fascinating. My thoughts disgusted me, yet at the same time I couldn’t deny them. As I stared back at him, the aggression in his eyes started to fade. Hope glinted there in its place.

Then I registered the blood on the floor around him. How the hell could I miss it? So much blood. It ran along the base of the far wall and pooled out over the floor, a shocking, plum-red stain on the pale wood. It was thick and unnaturally still, an occasional patch of it glistening under the dimmed overhead lights. Coagulated; no longer flowing. I had no idea how long ago it’d been fresh. The residue puddled around his bare feet and under his legs and arse, then slithered along the edge of the wall again, diverting around the base of a display case. I barely glanced at the case. It stood upright, but crooked as if broken, and the objects inside had been knocked over.

I just stared at the blood. Funny how these things strike you when you’re in shock; it was only after I noticed the mess that the smell hit me. Thick and putrid, seeping into my throat, daring me to gag. Why didn’t blood smell like this domestically? When I cut my hand, when I sliced meat? This was human blood in quantity, human life as it spilled. It had its own unique horror. Some of it had oozed between the young man’s toes—the dark crimson colour stark against the pale skin of his feet, a gruesome parody of piano keys. He sat like an island amongst a grisly sea, a pale shadow within the dark, viscous surround. When he put a hand out to the wall and started to ease himself up, I wanted to cry out, to tell him to stay still. I wanted to stop him spoiling the perfect, limpid surface around him, breaking the seal.

It was the shock made me think that way. Of course it was.

“Charles?” His voice was hoarse, as if he’d been shouting. “God, I’ve never been so glad to see anyone in my life.” He took a couple of shaky steps toward me. His shoes and socks lay in a discarded pile against the wall, soaked red with the blood. I couldn’t take my eyes off the print left by his foot, a dark smudge on the area of clean floor behind him.

There were other footprints—messy, scattered marks on the floor beyond the display case. They weren’t all his. A large huddled object lay against the right-hand wall, half hidden behind the furniture. That area, too, was covered in blood. It wasn’t an object, of course it wasn’t. I was ashamed to have thought of it like one of my exhibits.

It was a body. The body of another young man, even paler, even more disturbed. Even more still.