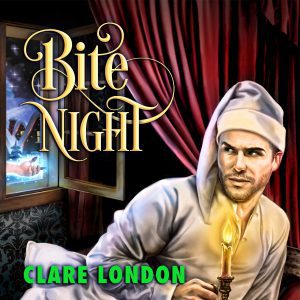 Creatures of the Night and Santa’s Christmas duties don’t mix. Every myth and bedtime story tells you so. But on Christmas Eve, when the Elves walked off the job over pension rights, it was time for me – Irwin, the only vampire on Santa’s payroll, despite recent diversity initiatives – and my trusty team to help out. Just deliver a few parcels, Santa asked me. Just help out on your local patch. Just for one night.

Armed with my reluctance to face all that human sentimentality and accompanied by a wise-cracking werewolf and an unruly fairy with a taste for vodka, I did my best. Honest. But we were heading for disaster until I came face-to-face with cute babysitter Benny. It’s Santa’s Number One Rule—no interaction with the clients. But Benny somehow managed to upset my appetite, inflame my libido, and restore my faith in the Christmas spirit, with one cheeky smile and a tasty body piercing.

It’s Christmas, and the show must go on!

“Irwin?” came a harsh whisper from behind me, at the window. “You eating all the cookies, you greedy bastard?”

With a rush of hot breath and prickly fur, Wulf burst into the room and skidded to a halt beside me. On all fours, of course, with his sack clutched in his teeth. He’d leaped the fence and approached through the back garden. I could only hope he’d kept his claws sheathed: they wreaked havoc with clients’ lawns.

“I don’t eat cookies,” I said to him. “As you very well know. The food is for you, and the milk or juice for Zilith.”

“Any sherry?” The mention of her name—and the promise of booze—had brought in the third person on my team. There was a swish of air as her butterfly-sized wings fluttered past, followed by a trail of glittery pink light from her miniscule toes. It never ceased to amaze me how she could also carry a sack a hundred times her personal size.

“Drinking on the job must be moderated,” I quoted from Santa’s handbook. Did I love being Mr. Human Resources, or what? Or maybe that should have been Mr. Inhuman Resources…. “You’ve had three sherries and a whiskey already from this street. Luckily, there’s only milk left out here.”

Zilith’s disappointed sniff expressed her opinion of the word “lucky.”

“Artificial tree. Huh. It’s a modern disease.” Wulf had finished the plate of cookies already—an expensive, organic brand, I noticed—and was prowling around the tree.

“What?” His body was long, lean and lupine, but the eyes were all mischievous bad boy.

“Piss up that tree,” I hissed. “I’ve seen you do it before, remember?”

“That other household wouldn’t have noticed.” Wulf yawned, his bright, white canines reflecting the twinkling tree lights. “Didn’t look like they’d cleared anything away from the previous Christmas. And did you see what their own dog left on top of the TV remote control? A delightful nugget of steaming—”

“Enough!” This was only the beginning of a long, long night, and I was already losing patience with the pair of them.

And then the guy walked into the room. We all stopped dead, him included. He looked to be in his early twenties, blond and blue-eyed. Mussed hair, barefoot, and dressed in loose jeans and a thin T-shirt that showed off some modest muscle definition and a couple of really tight, luscious nipples. One had the shape of a tiny metal bar threaded through it.

The guy looked from her to me, to Wulf. And then back to me, probably because I was the one nearest his own height. The bowl of popcorn in his hands dropped to the floor with a crash.

“Pass on that, princess,” Wulf growled to Zilith.