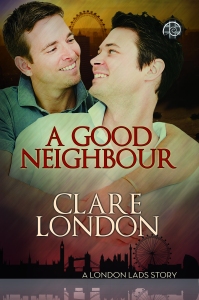 Dylan Philips admits it himself: he’s a relentlessly single man in a small suburban town, both proud of and resigned to being a good teacher and a devoted nephew to his mischievous Great-Aunts.

When the Aunts take a hand in matchmaking him with Josie Whitman, the girl who lives along the street, Dylan doesn’t tell them what kind of soulmate he’s really looking for—and the fact that he’s already found the man in question. It’s not Josie who’s travelling from London every month to her town property, but her journalist brother Neal. And Dylan meets up with Neal whenever he can.

But decisions must be made for their future. Dylan is risk-averse to everything from overseas travel to coming out, whereas Neal embraces adventure–and now he wants to take Dylan with him.

Horrified that his chance at love will move even farther out of his reach, Dylan realises it’s time for him to own up to what kind of man he really is. He needs to find courage and compromise. And who knows whether the Great-Aunts will be a help or a hindrance with that?

The door opened abruptly. For a few seconds, I just stared. My heart was hammering, fierce as anything. But the smile that greeted me was broad and mischievous and full of a welcoming love for life. It was also very familiar. Dark, strong features. With a mental nod to the Aunts, I stepped inside. My sight began to adjust to the change, the hallway furniture throwing elongated shadows across the pale, waning sunlight, and then the front door slammed behind me as if cutting me off from the life outside…

And I was plunged into another one.

I never had a chance to speak. The bouquet was snatched from my hands and flung onto the low table by the door. I was pushed back against the wall and a hard, flat chest pressed against mine, hot breath panting in my ear, broad hands reaching to push my jacket off my shoulders. Strong hands. Impatient.

“Fuck.” The voice was harsh and masculine. A man’s face brushed against mine, the jawline rough with a half-day’s stubble, the eyes gazing hungrily at me. “You’re early! I thought we said tomorrow.”

I laughed aloud, partly from protest, partly from the sheer joy of the touch. He was a few inches taller than I was, his body stocky, his shoulders broad. As he opened his arms to wrap them around me, the faded fabric of his shirt stretched tight across his chest, accentuating the sinewy planes of his torso.

“The Aunts insisted I come over today. I didn’t know when you were planning to arrive. If you were. Look, I can go…”

“Don’t you fucking dare!” he snapped, but his eyes were dancing with pleasure, not anger. The hallway smelled of furniture polish and the lingering aroma of warm toast. Up close, I could also smell strong coffee on his breath, but then he always drank too much of it, a symptom of his commitment to ridiculously long hours of writing and traveling. His face nuzzled into my neck, his skin warm, his thick curls uncombed and brushing his shoulders, just the way I liked it. I ran my fingers into it, tangling tightly, tugging back his head. Hard, just the way he liked it.

“Neal.” I groaned. His neck was taut, the Adam’s apple flexing as he swallowed. My lips tingled with the need to kiss it—to kiss him. “Thank God you’re here.”

He shook himself free of my grip, though I’d never intended it to hold him back. “Idiot. Of course I’m here.” He laughed raggedly, perhaps still impatient with me. He was panting slightly and couldn’t seem to keep his hands off me, grabbing, stroking, tugging at the soft fabric of my single decent shirt. A button slipped open and his fingers slid in against my bare skin, catching one of the swollen nubs of my nipples underneath and twisting it. It was painful—it was impossibly exciting. “Every damned month, right?” His voice was low and hoarse, even though we couldn’t be overheard. “If it’s humanly possible—wherever the hell I am—I’ll get here. I don’t want to miss it. Miss this. You know I don’t.”

That wasn’t entirely true. I hoped and I prayed—but I never really knew. And, God help me, I certainly never expected. But did I want to discuss that now? My fingers clumsy with excitement, I helped him open the remaining buttons of my shirt and I shrugged out of it. He took a shaky step back, one of his hands still gripping my wrist. His wild gaze sent goose bumps across my flesh. When he licked his lips, my whole skin shivered with anticipation.

“Dylan.” His eyes widened with eagerness. “Look at you. Christ.”

I started to laugh from nervousness and I swallowed it quickly. “You’re the idiot. I’m not… Well, I haven’t been to the gym much this month, you know…”

He laughed and let go of me. I watched him peel his shirt up over his head, my gaze fixed on the tensing muscles of his stomach. He was well toned for a man whose job was usually associated with long hours at a computer screen. The broad shoulders ran into a slender, wiry body. Plenty of strength there, I knew, the result of his hectic lifestyle and his personal enthusiasm in following a story physically as well as literally, taking him to all parts of the world. Dammit, he didn’t need a budget gym membership like some of us.

“Dylan,” he whispered. He was smiling, watching me watching him. He lifted a hand to his chest, teasing at one of his nipples, and I heard him suck in a short, fierce breath. I shuddered, instinct taking control of me. Dark hairs dusted across the skin of his pecs, then ran in a trail all the way down the center of his torso to his navel. And below. The skin was slightly tanned but there was a stretch of pale skin just showing under the waistband of his sweats. Long legs and strong feet, bare feet. I knew there’d be nothing else on under the sweats, and I was suddenly breathless.

1 thought on “A Good Neighbour”