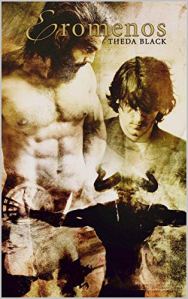 EROMENOS: Xander has no idea why his dreams have turned so repetitive, sexual and uncontrollable. They’re threatening his sanity and driving his dorm-mate, Seth, crazy. Worse yet, the dreams have power. People are getting hurt, and neither of them has a clue how to stop it.

Luckily Xander has Seth, and that might be enough to overcome anything–even the commands of a god.

Read on for details about Theda …

Theda Black lives in the shadow of the Smoky Mountains with her husband, two kids and a plethora of pets. Her tastes run to genre stories: science fiction, horror, western, fantasy, a dash of cops and robbers. Sometimes the pulpier it is, the more she loves it, delighting in the suspension of disbelief.

As someone who loves black-and-white films, character-building, comics and space aliens and the deep pathos of Frankenstein’s creature, Theda Black writes for and about love. As her alter-ego, Klaudia Bara, she puts the kibosh on her fears by exploring and manipulating them.