HIDDEN HEARTS – Bad Valentine 3
Releases Feb 1 and now on pre-order
Details, Blurb, the Other Titles, and an Exclusive Excerpt 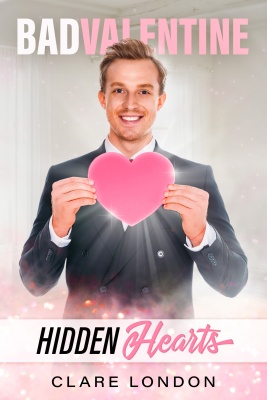 On pre-order today, available at Amazon and in Kindle Unlimited:

A catalogue of disasters dogs the footsteps of their blossoming romance, including a coffee date with food allergies as an added extra, an intimate dinner that strays too close for comfort to chopped chillies, and a sensual massage with hot wax candles that threatens to alert the local fire brigade.

But if they can hold tight to their sweet, surprising, yet single-minded attraction – they might just survive this Valentine’s Day with something very special to look forward to.

BAD VALENTINE is the brand new series of lighthearted Valentine’s Day shorts by four different authors, each story written with the same opening line: Nothing good ever came of a Valentine. FIND LINKS TO ALL THE STORIES HERE.

Hidden Hearts by Clare London (Contemporary MM Romantic Comedy, 15k words) Ethan’s dating history is one long catastrophe, until a mis-matched Valentines date with Kel brings the hope of new love. That’s assuming the romance survives a few more disasters!
Love Magic by Jesi Lea Ryan (Paranormal MM Romance, 10k words) The day I met Derrick while playing my violin in the Park was magical. Unfortunately, love and magic don’t always mix.
Quill Me Now by Jordan Castillo Price (Paranormal MM Romantic Comedy, 25k words) Dixon Penn’s family wasn’t terribly shocked when he announced he was gay. But they were devastated to find out he’s the only one without the gift of Spellcraft.
Temporary Dad by Dev Bentham (Contemporary MM Romance, 22k words) A one night stand that should have started a love story and the stupid lie that got in the way. Add a disruptive seven-year-old and mayhem ensues. For Nick and Dylan, there are plenty of twists on the road to happy ever after

Ethan glanced over at table eleven, as he’d been directed to.

Ethan’s last few boyfriends had all been very much like him. Reserved, modestly dressed, with an office job. The guy at table eleven was… something else.

And. Oh my God, again. Were those tattoos?

Ethan felt a bit faint. He took a clumsy step forward, knocked into a table and sent a chair and all the cutlery flying. He took a full minute apologising to the waitress who came to help, and when he stepped away, he winced as he felt the little vase and flowers crunch to pieces under his boot.

The man had stood, facing Ethan’s approach. He was probably a good six inches taller than Ethan. It was totally inappropriate, but Ethan had a sudden, vivid image of being scooped up by that thick arm and pressed against that big body. Hard.

“Hi. I’m Ethan. This is bloody ridiculous, isn’t it? I mean, this whole set up. I don’t expect you imagined you’d get stuck with a skinny, boring accountant.” Whose voice was that, rambling on? Jesus, it was his.

The guy was watching Ethan’s mouth. Was he deaf, maybe? Ethan had learned sign language at one time when he had a hearing-impaired friend at university, but he wasn’t sure he could remember much more than the alphabet and the sign for bullshit. Yeah. Also totally inappropriate. “Well. I’m skinny, at least.” Ethan smiled ruefully.

Kel’s beard crinkled at the edges of his mouth when he grinned. “Lovely smile,” he said.

“Oh. Thank you,” Ethan replied. He felt himself blush. And smiled again.

Kel pulled out a chair and Ethan stared at it for a moment until he realised it was so he could sit down. What good manners. He sat on the edge while the waiter brought them water and a small bowl of nachos.

Ethan wasn’t sure if it was a question or an order, but he was bloody hungry and the nachos smelled great. So much better than a bowl of nuts, which he usually had to avoid because of his occasional reaction, or those pretzel things that he once chipped a tooth on, or crisps that got stuck in clumps on his soft palate and made him cough. He hadn’t eaten all afternoon, because he’d been too nervous about tonight, and too angry with Pips at signing him up for something he knew nothing about.

Ethan flinched. From the amused look on Kel’s face… “I said that aloud?”

Kel smiled. “No problem.” He reached over and pulled a couple of nachos off the plate, dragging a long, delicious string of cheese with them.

Ethan pushed embarrassment aside and all but fought Kel for the rest of the bowl’s contents. He chatted about anything and everything whenever the table fell silent, which was most of the time, though Kel seemed content to listen.

When they both grabbed for the last chip, Kel lifted his hands away and sat back. “Yours. Good to find someone who likes his food as much as I do.” He watched Ethan chewing away as if he had all the time in the world, smiling with a gentle twist of his mouth all the time. It was very sexy.

“Sorry.” Ethan swallowed the last strands hurriedly. “I mustn’t talk with my mouth full.” He’d sprayed crumbs and spittle all over a date’s face before now in his rush to be both fed and charming. “This would be a poor date then, wouldn’t it?”

Kel shrugged, but for the first time he looked uncomfortable. “Honestly? I’m a poor date on my own. I don’t talk enough.”

Ethan waited for more elaboration but it never came. “Well, talking’s not everything. My flatmate says I can talk enough for two. Or maybe five.” He laughed nervously.

To his surprise, Kel laughed too. “I like that. You know a lot of things. And you don’t expect me to chat a lot about myself.”

Ethan snorted. “That’s my problem, not yours. I’m going to confess up front, I actually know nothing about F1 motorsports. My flatmate lied on my profile.”

Kel looked bemused. “I watch every championship, but I wouldn’t expect you to as well.”

“But I think that’s why we’ve been paired. By shared hobbies.”

Kel nodded slowly, realisation dawning on his face. “You in international finance?”

Ethan blinked at the bizarre question. “Hardly. I am an accountant, though. Ah!” The penny dropped. “That’s what was on your profile?”

Far from feeling cheated, Ethan felt tremendously relieved. “Pips also put ‘gourmet food lover’ on mine. I love eating, as you can see, but that’s as far as my involvement goes. I can barely scramble an egg.” Well, he could cook basic dishes, but Pips said they invented smoke alarms as a timer for Ethan’s cooking, considering how often he set off the one in the flat.

“I cook.” Kel didn’t expand on that but a flash of pride lit up his eyes, in a sudden burst of warmth. “But I don’t read poetry.”

“Poetry…? Oh, another of your sister-in-law’s economic use of the truth.” Ethan chuckled. “I read a lot, but romantic fiction, mainly.”

Kel’s mouth twisted in that lovely lopsided grin. “Car magazines, in my case. I run my own garage.”

Kel raised his eyebrows. “Only if you like cars.”

Ethan burst into laughter. “I suppose so. But it’s exciting that you have your own business. I’d like to know more about that, whatever you want to tell me.”

Kel looked disbelieving, but his eyes sparkled with pleasure in the reflection of the table candle. The same candle that Ethan had nearly upended when he reached for the menu, until Kel moved it out of harm’s way without further comment or tease. Now he haltingly explained a few of the things he did at the garage, what his customers needed. Which cars were his favourites to work on. How he maintained the fleet of many small delivery businesses.

Ethan watched his animated expression, his slow but deep smiles of pride, his hands as they carefully sketched out several mechanical processes. He took the time to explain things to Ethan without assuming Ethan understood anything to start with, yet without patronising him. It was very refreshing, and Ethan was astonished at how captivated he was.

That was why he knew he had more to confess….