Much like a fine wine the Best Gay Erotica series just keeps getting better with each passing year—and this year’s volume is no exception!

A selection of its authors talks about their inspiration and what drives their stories.

“Eight Nights” by Richard May.
Hanukkah on All Fours.

My stories are almost always inspired by a visual. I see a photo or a painting or a person, and a story starts telling itself to me. “Eight Nights,” my story in Best Gay Erotica, Vol. 4, was inspired by two visuals. One was a friend’s photo from the Folsom Street Fair of a bare chested man in black leather pants leading another man by a leash. The man on all fours was dressed like a dog, completely in black leather. The second visual behind my story was the face of a man I worked with years ago. We never had sex, and I’m not into leather, but then my story is fiction, not history.

In the summer of 2013, I woke from an incredible dream about four handsome, young men making love. But the love was the most telling part of the dream, not their sweaty connection. I remember thinking that the emotion was palpable, beautiful. I dashed down notes on a card about this dream, and the card went into my catalog of unwritten story ideas. Flash ahead four years. Quite often, ideas in that metal recipe box—what I think of as my own personal treasure chest—seem to howl at me for attention, jump to the front of the line, and demand to be written. Such was the case with “Foursome”.

I write all of my first drafts longhand. Though years had passed between the dream and my putting pen to paper for “Foursome”, the passionate energy resonated as I wrote the pages. Those four characters loved one another as much then as in the dream. More so, because now they were alive in an actual, completed draft.

Nightly, I go to bed thinking about my muse, who is a man (sorry, Terpsichore and Sisters), the previous day’s writing adventures, and those that will greet me the next morning. And often, I’m rewarded with wonderful new stories in my dreams. “Foursome” was one such dream and a joy to pen.

The characters that live in my head don’t necessarily stop what they’re doing just because I’ve typed the words THE END.

Case in point, the sexy short story I’ve titled Appetite, which is a cut scene/alternate ending from my vampire thriller, Hemovore. Writing novels is tricky because every scene needs to contribute something specific to the shape of the story. Sometimes scenes that are yummy in themselves need to get cut for length or tone or plot reasons. While adding another love scene in Hemovore would have really cemented the development of the characters’ relationship. I felt it took the punch out of the main event – the fact that despite the deadly Hemovore Virus, the characters could find a way to come together at all.

Still, the chapter that became Appetite is a deliciously dark sex-and-blood scene that stands well on its own, so I’m thrilled it’s found a home in BGE4. 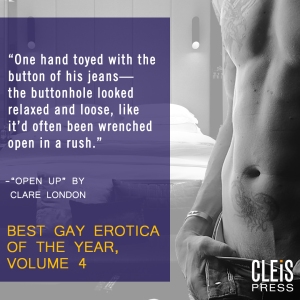 Open Up came to me as an idea to mix something very sexy and very raw, but with a twist of dark humour, almost horror, based on one of my own fears – the dentist’s chair! The siren call of sensual need so often hovers right on that edge. Our visceral reaction can be as strong toward passion as it is toward panic… can’t it?