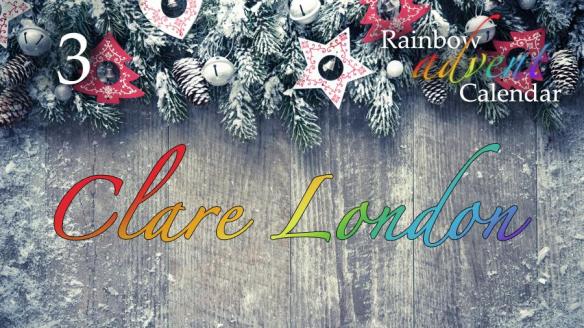 Follow the Rainbow Advent Calendar* Group this December, with FREE fiction every day from favourite MM authors. Make sure you bookmark the group, visit it regularly, and please let the authors know you’re loving the reads!  😀

And read my story BELOW, because I’m on TODAY 🙂

ALL THE STORIES can be followed from this MASTERLINK.
And last year’s schedule?? 2017 HERE. Because many of us authors are becoming regulars *wink*.

If you enjoy my story, please check out all my other seasonal books HERE.

*the Facebook Group requires you to join, but it’s free for all readers. The more the merrier! 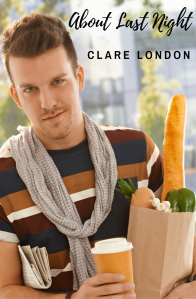 Roger only popped out for breakfast supplies. Was that long enough for Allen to have second thoughts?

Read it FREE below, or download it in all formats for later.

“You’re back quickly,” came Allen’s muffled voice from inside the flat.

Roger stood patiently in the hallway, outside the closed front door. “Is that a problem?” He peered at the spyhole, though obviously he couldn’t see inside from where he was.

Allen coughed. There was a shuffle of feet. The door remained firmly shut. “Yes. No. Maybe.”

“Cover all the bases, why don’t you,” Roger said. He shifted the bag of supplies from his right hand to his left to ease the weight. “I brought the stuff we need for breakfast.” There was silence from inside. Roger frowned. “Unless you have some new, inter-dimensional way of cooking bacon, I’d say it’s pretty tricky to proceed when the cooker’s in your kitchen but the food is out here in the hallway, still in a shopping bag. But hey…”

“All right, all right,” came the snappy answer. “Cut the sarcasm. I suppose you want to come in with it, like… right now?”

Roger rolled his eyes, even though no one could see him. “I’m demanding that way, yes. Is something wrong? You were all right when I left you.”

“I’m fine.” Allen’s voice sounded strained. “Of course I am.”

“Of course,” Roger echoed in a murmur. The door was still shut. His gaze roamed over the hallway. A dog was barking in another flat downstairs. One of the doors further up the corridor had a dent in it as if someone had kicked it in. Another had a child’s bicycle stacked against it. Roger thought he could smell toast from another room and it made his mouth water.

“Do you want to go out for breakfast instead?” He listened for any change in Allen’s tone, assuming he could tell that from complete silence, of course.

“Do you want me to fetch something different? There aren’t a lot of places open on Christmas morning, of course. What about some of those hash brown American things? Pancakes? You like all those…”

The muffled grunt was angry now, though Roger hoped it was with itself, not him. He took a calming breath and put the bag down on the floor, relaxing his wrist. “Work with me here, Allen. If there’s a problem, tell me. I’ll go and sit in the one coffee shop that’s open and wait for you to join me, if you like. Or I can go back to my own flat.” He sighed. “Though I don’t want to, believe me. I want to talk to you some more, have breakfast with you. See more of you.” He smiled, still to himself of course, unless you could count the small spider in a web on the staircase. “I’m bloody hungry, too.”

“So am I,” Allen said, but he made it sound like a declaration of intercontinental hostilities. His brow was furrowed, his generous mouth pursed. “Of course you can come in. I’m just a stupid, moody bastard.”

Roger ran his gaze down then up Allen’s body, taking in the sleep socks, the crumpled pyjama pants, then the bare torso. By the time his eyes met Allen’s, he could feel the flush heating his face.

“You’re not stupid,” he said slowly, as if he were really considering Allen’s self-assessment and not trying to get his libido back under control. “Moody, yes, maybe. Lively. Impulsive. Volatile…”

“Smart arse,” Allen interrupted, scowling even more, though his mouth twitched at the corners. “So, come back in. I haven’t got dressed or cleared up or anything.”

Roger stepped cautiously into the flat, watching as Allen slammed the door behind him with a firm push of his knee. “Why should you clear up? I just went out for food. I wouldn’t have bothered, really, but you only had that out-of-date cereal and no tea.”

Allen shrugged. He was keeping two feet away from Roger as they moved down the hallway towards the kitchen. “Hell, if I’d known I’d be entertaining…” He bit off the sentence, colouring.

Roger smiled. “You were that, definitely.” He reached out a hand to stroke Allen’s arm.

Allen stopped dead. “You’re a witty bloke, Roger, but if you joke about this—”

“God, no!” Roger protested. He stopped walking as well. He took his hand away and ran it back through his tousled hair. “It’s no joke. I mean, it was fun and exciting, but I’m taking it very seriously.” When Allen peered at him, slightly less warily, he smiled back. “Exciting doesn’t cover it. Inspiring. Awesome. Astounding.”

Allen had started to smile, too. He reached a hand out himself, and fingered the edge of Roger’s thin jacket. “Yeah, right. Like the earth moved for you.”

Allen’s eyes widened. “Not just because we were totally wasted after the Christmas Eve party? I mean, it was pretty wild.”

“No,” Roger said quietly. Though the party had, indeed, been wild. Getting a cab to the nearest flat—Allen’s—had been all they could manage after it finished. Laughing, still drunk, sharing stories of the people there. The flat had been dark, peaceful, private. There’d been no plans, no premeditation.

Just a sudden touch. And then the floodgates opened.

“Not just for a laugh, or… to experiment?” Allen obviously noticed Roger’s frown, because his gaze slid away again, and he hurried on, “You know how some blokes can be. Try it for the sake of getting off. Do it because we were there and randy and a friend’s better than a stranger from the pub. Do it…”

Roger stepped forward and grabbed Allen’s arm, tightly. “None of that. I did it—we did it—because we wanted each other. Didn’t we? I’ve wanted you for a long time.” His laugh sounded nervous. “As a friend you’re great, of course, but then there’s the other thing.”

Roger coughed to hide his embarrassment. “The way I feel when you wear that dark blue shirt, or you suck syrup off your fingers, or you hunker down by the TV to find the remote, or you wander about the kitchen making bacon with nothing on but pyjama pants—”

“I can lose the sleep socks,” Allen said quickly, grinning. “Watch me.” His eyes were brighter now.

Roger could hear his own breath in the quiet hallway. It was much shallower than before. “But if you’re having regrets…”

Allen shook his head vigorously, his eyes fixed on Roger’s mouth. “Hell, no. Just thought you might be. You know? You got up way earlier than I would. And this going out for breakfast stuff. It might have been an escape. You might not have bothered to come back.”

Indignant, Roger started to protest, but Allen stopped the words with his hand over Roger’s mouth. Allen’s palm was slightly damp and smelled rather deliciously of him.

Roger let his tongue slip out, just the tip of it. He licked the skin at the base of Allen’s thumb.

Allen’s breath hitched. “I mean, it doesn’t matter, Rog, if you had gone. I’d still have things left here, like the smell of you on the sheets and all your spare change on the floor by my bed. But I had hoped…” He flushed. “That we’d do it again some time.”

Roger grunted until Allen took his hand away. “But I’m back. I didn’t escape.”

Roger met Allen’s stare for a long moment. He suspected the inane grin was common to them both. “So, what about you?” he asked. “Was it the same for you? Maybe you’re the one who just wanted something casual, just needed—”

“You,” Allen interrupted. He looked fierce again but it wasn’t one of his hostile expressions, more like a hungry one, and perhaps not for pancakes. “Yeah, I agree, the friend thing is great, but I’ve wanted you—like wanted you—for a long time. The way you grin, really slowly, and the way those jeans hug your bum, and the way you run your hand back through your hair…”

Roger did the hair gesture again. And grinned. Really slowly.

Allen had also started to breathe very heavily. He glanced down the corridor in the direction of the bedroom door.

Roger turned them both around and pushed Allen bodily towards it. “That thing about doing it again some time…”

Allen nodded, and kept nodding. “Yeah. Right. Pity you had to get dressed to go shopping.”

Roger began shrugging out of his jacket and shirt with indecent haste.

“You’re still hungry, though,” Allen said. His grin was mischievous.

Roger slid a hand down inside Allen’s pyjama bottoms and squeezed his arse.

“Okay,” Allen gasped. He twisted his head back to breathe into Roger’s ear, to lick at the lobe. “The cooking can wait, I suppose. Stale cereal’s good, too.”

Roger’s mouth groped clumsily for Allen’s. “It’ll have to be.”

“We’d need the inter-dimensional cookbook.” He pushed with more determination until Allen tumbled back onto the bed, both of them laughing. “The food’s still out in the hallway!” 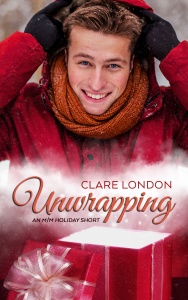 And last year’s short story is still available too, in case you missed it. It’s here as a FREE download: UNWRAPPING.