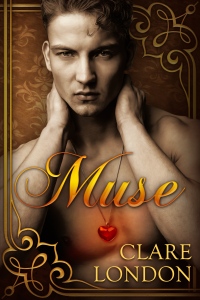 to be releasing one of my favourite paranormal romance short stories MUSE at all the usual outlets. It’s a re-issue, so you may have read it in its earlier version, but if not, and you love romance, art and artists, time travel, explicit and uninhibited love, angst-but-with-an-HEA… it’s the book for you :D.

BLURB: Gavin McGrath’s art career is in ruins, his health is failing, his wife’s left him because of his promiscuity, and he’s alienated people in the industry with his aggressive and arrogant behaviour.

But when a full pot of red paint falls on his current canvas, apparently ruining it, it brings a change in his life he never expected. A strange, beautiful young man appears in his studio as his companion and Muse. Matteo is from another time but he understands artists all too well—and now his place is with Gavin.

Matteo brings devotion and inspiration across the centuries, forcing Gavin to take stock of his life and his behaviour in the months he has left to him. Eventually Gavin realizes he must reconsider the capacity for love he’s always scorned—before it’s too late for both him and Matteo.