Today’s guest is CHARLIE COCHRANE. Please show your appreciation for the post if you enjoy it, and all the author’s links are below for you to take forward. Watch every day for any Rafflecopter giveaways, and don’t forget there’s ALSO a Grand Prize Draw at the end of the month for ONE lucky commenter.

In the light of the untimely death of Alan Rickman I’ve been recently musing about the wonderful Shakespeare plays we’ve been to see. Stratford happens to be one of my favourite places and when we were first married, long before we had strings of whompers in tow, we used to go up there (or to the Barbican) regularly to watch the Royal Shakespeare Company or other great companies of players. And some fantastic plays and actors we saw; Patrick Stewart as Titus Andronicus, Derek Jacobi as both Prospero and Benedict, Ben Kingsley as Othello, Anthony Sher as Richard III, the aforementioned Alan Rickman as a hilariously sardonic Jacques – and not forgetting Dustin Hoffman as Shylock.

There was, however, a gap in our bard viewing when the children were young and we couldn’t face forcing them to sit through anything more demanding than a pantomime. Then we were brave and took them up to London to see Midsummer Night’s Dream in the open air at Regent’s Park – what a revelation! The little ‘un, who must have been only six, laughed so much that the woman in front kept turning round to look at her in amazement. It meant Shakespeare was back on the menu.

Since then we’ve been back up the M40 to see our beloved Patrick Stewart as Prospero, David Tennant as Hamlet and a wonderful production of As You Like It. (And we’ve also gone along the M27 to see the astonishingly versatile Patrick Stewart as a hilarious Malvolio in a performance of Twelfth Night that brilliantly explored some of the extraordinary gender issues in that play.)

Now, I can gauge that there’ll be some reaction out there which is immediate envy and I’ll apologise for our luck at being so close to such great theatre. But there’ll also be some people who think we’re bonkers at taking the whompers to such highbrow stuff.

Don’t the kids misbehave and make a noise? No, they’re too engrossed. And if you expect them to behave well, they usually do.

Don’t they struggle to follow what goes on? No more than their father does and, if the acting and staging is good enough, that doesn’t matter – they’ll just be swept along.

Don’t they get bored? Not half as much as if they just read the plays. 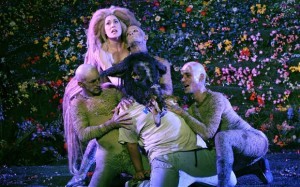 Shakespeare’s plays only come alive on the stage and when they’re filled with really good actors, people who have a grasp of timing and intonation and stage business. Getting a class of kids to reads parts aloud risks missing half the point and all of the jokes. Ever seen somebody get three laughs with, “I go, I go; look how I go, Swifter than arrow from the Tartar’s bow”? It’s not funny when you read it, but I’ve seen an actor milk those lines for laughs. And very funny he was, too.

Maybe that’s the key. See Shakespeare played well, in a non gimmicky production, with people who get the comedy and get the tragedy. And don’t leave the kids at home – they might explain what’s happening onstage to you!

As Charlie Cochrane couldn’t be trusted to do any of her jobs of choice—like managing a rugby team—she writes. Her favourite genre is gay fiction, sometimes historical (sometimes hysterical) and usually with a mystery thrown into the mix.

To sign up for her newsletter, email her at cochrane.charlie2@googlemail.com, or catch her at:

Jan 01: RJ Scott on her inspiration for a new series in 2016.
Jan 01: Temple Dragon on giving for free during December.
Jan 02: Chrissy Munder on an author’s passion for paper planners.
Jan 03: Meredith Russell on inspirational cop series.
Jan 04: Becky Black on her five-year anniversary as an author.
Jan 05: Alexa Milne on characters stepping outside their comfort zone.
Jan 06: Sandra Lindsey on her dancing shoes challenge.
Jan 07: Anne Barwell on her WWII trilogy at Dreamspinner Press.
Jan 08: Elin Gregory on reviews – past, present and future.
Jan 09: Eli Easton on mature heroes and our life choices.
Jan 10: Julie Moffett on the geek in us all.
Jan 11: Jaime Samms and the rewards of an online life.
Jan 12: LC Chase on paying kindness forward.
Jan 12: EM Lynley on the recipes that add taste to her books.
Jan 13: Nicki J Markus on falling in love with her characters.
Jan 14: Vicktor Alexander on giving thanks to friends and fans.
Jan 16: Joanna Chambers on the spark of joy from reading and writing romance.
Jan 17: Jordan Castillo Price on esteem-building new year do-overs.
Jan 18: Lillian Francis on deciding on when to come to an end.
Jan 18: Hunter Frost on a Top Ten new anthology.
Jan 19: Lily Harlem on hot fiction and cool drinks.
Jan 19: Liam Livings on how writing is like ski-ing.
Jan 20: JL Merrow on being a boot-aholic.
Jan 21: Paul Alan Fahey on growing up gay in the 1950/60s.
Jan 22: Mickie B Ashling on her new period novel set in Pakistan.
Jan 22: BJ Sheppard on his new cover services business.
Jan 23: Aimee Brissay on her publishing plans for 2016.
Jan 24: Sarah Madison on her age anorexia.
Jan 25: Deanna Wadsworth on the Rainbow Romance Writers Chapter of RWA.
Jan 25: Alex Jane on her story so far – and the UK Meet 2015
Jan 26: Caraway Carter on love and thanking his Mom
Jan 27: Lucy Felthouse on love in the Peak District.
Jan 27: Mercy Celeste on our friendship and embarrassing Clare 🙂