Today’s guest is LUCY FELTHOUSE. Please show your appreciation for the post if you enjoy it, and all the author’s links are below for you to take forward. Watch every day for any Rafflecopter giveaways, and don’t forget there’s ALSO a Grand Prize Draw at the end of the month for ONE lucky commenter.

Peak District Prettiness in Love on Location by Lucy Felthouse

It’s no secret to anyone that follows me on social media or reads my blog posts that I’m a fan of the Peak District, in England. And now you know, too, it’ll be no surprise that I write about it a fair amount in my books, too. 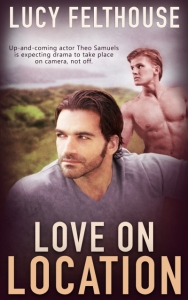 Love on Location is a perfect example. When I first started thinking about my contribution to the Brit Boys: On Boys boxed set (where this novella first appeared), I knew I wanted to set my story in the British countryside, and the Peak District was the obvious choice for me. But who would my characters be, how would they meet, what was their story? Once I’d gotten the basics figured out, the story pretty much wrote itself. It’s set in the fictional village of Stoneydale (for those that are interested, or think they might recognise the place, it’s based on Tissington), and because I know the real place so well, I just let the story unfold. I didn’t have to stop to check on locations, do fact-checking, and so on. Not that it would have mattered, of course, since the village in the story is fictional, but it’s always much easier for me to write places if I can visualise them in my mind.

The village and surrounding area are as much a part of the story as the characters, really. For example, the boys, while out for a walk, end up sheltering beneath a bridge on a local trail. It makes me smile every time I pass by now. I very much hope that readers will appreciate the local flavour, and will be transported to the beautiful places as they read about them.

When Theo Samuels heads off to film on location in the village of Stoneydale, he’s expecting drama to take place on camera, not off. But when he meets gorgeous local lad, Eddie Henderson, he struggles to ignore his attraction. A relationship between the two of them would be utterly impractical, yet they’re drawn together nonetheless. Can they overcome the seemingly endless hurdles between them? Or is their fling destined to remain as just that?

Note: Love on Location has been previously released as part of the Brit Boys: On Boys boxed set.

Buy from Amazon, or read as part of your Kindle Unlimited subscription: http://mybook.to/loveonlocation

Add to your Goodreads shelves: https://www.goodreads.com/book/show/28373646-love-on-location

***Lucy is offering a copy of one of her solo backlist MM titles. Join her Twitter and/or Facebook page to be entered in the draw.

Theodore Albert Samuels strode through Stoneydale Hall, barely giving the opulent furnishings, the priceless art or the stunning architecture a second glance. It belonged to him, after all. It was all his, his birthright, his inheritance.

He stopped suddenly. “Damn,” he muttered under his breath, hoping none of the film crew were taking any notice of him. Looking over, it appeared they were still absorbed in figuring out lighting, props and where the actors should stand to get the best shots. Good—he wasn’t due to have a camera pointed at him for another two days; plenty of time to get his head around his role. And it was imperative he did—it was his biggest and highest profile part to date. If he got this right, it could truly launch his career. Maybe even into Oscar-winning territory.

Taking several deep breaths, he pulled himself up to his full height of 6ft 4” and adopted a haughty, disinterested manner—channelling Mr Darcy, perhaps? Either the one from Pride and Prejudice or Bridget Jones’ Diary would do.

I am William Arthur Stoneydale. And this property is mine.

They’d pretty much been given the run of the house—the real owners having gone to the south of France for the summer—so Theo continued marching around, upstairs and down, pulling in everything he could from his surroundings to make him truly feel like lord of the manor.

Sighing, he ran a hand through his mop of black curls and headed out into the gardens. They were beautiful; all manicured lawns, parterres, rose gardens, arches and perfectly placed shrubs. Despite the perfection, Theo felt more comfortable here—probably because he’d always been an outdoorsy sort, ever since he was a child. Only the strict yet loving influences of his parents had coaxed him inside to do his homework, study for his exams and eventually land himself a place at The Royal Academy of Dramatic Art, better known as RADA.

The latter had been completely his choice—his mother and father had only wanted him to work hard and do his best. His career options had not been chosen by them, only supported.

Slumping onto a bench, Theo reminded himself of his parents’ wholehearted support and belief. That, and the fact he’d graduated from RADA with a first. Following that, he’d gone from strength to strength.

“Come on, Theo,” he muttered to himself. “You can do this. It’s just another role. A role you can play. Can be.”

His solo pep talk was interrupted by the sound of footsteps crunching on gravel. Then, from behind a line of expertly done topiary appeared a young man, perhaps a few years Theo’s junior.

“Oh,” the other man said, slowing as he spotted Theo, “sorry. Didn’t know anyone would be out here. You’re not filming, are you?” He looked around for cameras. “I was told it wouldn’t be for a few days, give me time to finish—”

Theo cut him off. “Relax, mate, there’s no filming today. Not anywhere. The crew are still setting things up.”

The other man heaved a sigh of relief. “Oh, that’s all right then. Gave me a fright, that did. I need to make sure everything’s spot on in the gardens before they get rolling. So, what’s the star of the show doing out here by himself, anyway?”

The man made a scoffing sound. Then, “That’s not what I’ve heard. I’m Eddie, by the way. Eddie Henderson.”

Theo took the hand that was offered, and shook it. “Theodore Samuels. Theo. Nice to meet you.”

“You too. So, you never answered my question. Everything all right?”

“Yeah, I suppose,” Theo said with a shrug. “Just nerves, I think. I’m struggling to get into the right mindset for this character. But I’ve got a couple of days—so I won’t panic just yet. Actually,” he paused as a bright idea illuminated his brain, “could I ask you something?”

Eddie took a seat beside Theo on the bench, and it was only when they were up close and personal that he realised just how handsome the younger man was. He had a lightly-muscled build, ginger hair, a riot of freckles on his face and forearms, blue-green eyes and a slight gap between his two front teeth. Cute and sexy all at once. Christ, he’s going to be trouble.

Jan 01: RJ Scott on her inspiration for a new series in 2016.
Jan 01: Temple Dragon on giving for free during December.
Jan 02: Chrissy Munder on an author’s passion for paper planners.
Jan 03: Meredith Russell on inspirational cop series.
Jan 04: Becky Black on her five-year anniversary as an author.
Jan 05: Alexa Milne on characters stepping outside their comfort zone.
Jan 06: Sandra Lindsey on her dancing shoes challenge.
Jan 07: Anne Barwell on her WWII trilogy at Dreamspinner Press.
Jan 08: Elin Gregory on reviews – past, present and future.
Jan 09: Eli Easton on mature heroes and our life choices.
Jan 10: Julie Moffett on the geek in us all.
Jan 11: Jaime Samms and the rewards of an online life.
Jan 12: LC Chase on paying kindness forward.
Jan 12: EM Lynley on the recipes that add taste to her books.
Jan 13: Nicki J Markus on falling in love with her characters.
Jan 14: Vicktor Alexander on giving thanks to friends and fans.
Jan 16: Joanna Chambers on the spark of joy from reading and writing romance.
Jan 17: Jordan Castillo Price on esteem-building new year do-overs.
Jan 18: Lillian Francis on deciding on when to come to an end.
Jan 18: Hunter Frost on a Top Ten new anthology.
Jan 19: Lily Harlem on hot fiction and cool drinks.
Jan 19: Liam Livings on how writing is like ski-ing.
Jan 20: JL Merrow on being a boot-aholic.
Jan 21: Paul Alan Fahey on growing up gay in the 1950/60s.
Jan 22: Mickie B Ashling on her new period novel set in Pakistan.
Jan 22: BJ Sheppard on his new cover services business.
Jan 23: Aimee Brissay on her publishing plans for 2016.
Jan 24: Sarah Madison on her age anorexia.
Jan 25: Deanna Wadsworth on the Rainbow Romance Writers Chapter of RWA.
Jan 25: Alex Jane on her story so far – and the UK Meet 2015
Jan 26: Caraway Carter on love and thanking his Mom