Today’s guest is SARAH MADISON. Please show your appreciation for the post if you enjoy it, and all the author’s links are below for you to take forward. Watch every day for any Rafflecopter giveaways, and don’t forget there’s ALSO a Grand Prize Draw at the end of the month for ONE lucky commenter.

If there’s such a thing as ‘age’ anorexia, I have it.  I know, I know, that sounds weird, right? It’s true, though. When I look in a mirror, I see every line, every wrinkle, every gray hair… I’d go on, but you get the picture. All my perceived failings magnified to the nth degree. The thing is, I’ve been doing this as long as I can remember. Well before I actually hit middle-age, I began mourning the things I was going to lose someday. Long before aches and pains caught up with me, I heard myself lamenting what I could no longer do, with a few rare exceptions. Those times when I bucked the own negative soundtrack in my head were only when I wanted to do something so badly I resisted all the naysayers around me, myself included.

I came by my ‘anorexia’ honestly. I grew up hearing how horrible it was to get old, and was taught from an early age to fear loss of independence. My parents even told me not to get old, as if there were many other options.  Now that I am actually facing the kinds of issues I’ve been terrified of my entire life, suffice to say, my level of acceptance hasn’t been very good. Instead of doing anything constructive about my fears, I’ve pretty much taken a head-in-the-sand approach because, you know that works so well.

I’ve never been good at the whole ‘act as if’ concept either. Act as if you are successful, talented, sexy, beautiful… If I don’t believe something, I can’t fake my way into belief. And yet at the same time, I’m very much aware of the power our minds hold over us. We hold the key to making or breaking our lives by the way we think about ourselves—and ain’t that a kick in the teeth? Because the implication there is that we doom ourselves with our own negative self-speak and unhelpful thought patterns.

I tore my rotator cuff last spring, which knocked me for a loop. When you’re a fiercely independent person, and your life is physically demanding, it’s a real wake-up call to find out you’re facing surgery and restrictions. More recently, I got some mildy bad news about my health a few weeks ago. Not the terrible kind, which leaves you in a cold sweat, wondering how you’re going to get through it, but the kind that serves as a little ‘uh-oh’ and a reminder you’re not as tough or as invincible as you thought. I’ve been very fortunate to be blessed with good genes and good health, and it’s been a major adjustment to realize I can’t keep taking these things for granted, that I’m responsible in part for taking care of what I’ve been given. The combination of the two woke up the lightly sleeping Age Anorexia Demon, and I found myself taking more and more things off my list of things I Should No Longer Do as a result.

I wasn’t happy when I read a post about how negative thoughts regarding aging was correlated with significantly more aging problems, including dementia. Yikes. But like I said before, how do you change the mindset you’re locked into?

Fortunately, a couple of things have happened recently that have pulled me up short and made me re-think what I’m doing.

First, I saw this delightful video on Facebook. I confess, mentally I shrieked during most of the dancing that she was going to break some bones, but the reality of it is that it was marvelous and beautiful and if this woman can dance like that at her age, then perhaps I’m not ready to give up some of the things I’ve been setting aside with tears. I’m not saying determination and persistence can overcome age and infirmity, but I do believe I’m a long way from being the old woman I’ve been acting lately.

In the past week I’ve been blindsided by the recent deaths of David Bowie and Alan Rickman. I didn’t know either artist had been ill. I’m left at a loss to explain how two such talented people have made such an impact on me that I feel gutted by their passing, but I do. I’m not the only one, either, given the heartfelt tributes I’ve read to both performers. Of all the amazing things I’ve read, I think I was most struck by Chuck Wendig’s blog post: Death Becomes Us. The post is well-worth reading; you should check it out. The part that resonated the most with me was when Wendig stated this:

Love those that you have while you have them.

And do what you love while the world has you.

And it made me realize I’m not done yet. I haven’t loved enough, or created enough, and there are still a lot of things I want to do. I can piss and moan about the things I can no longer do, or I can rush out and embrace the things I can. Who wants to live forever anyway? Not me. Live well, on the other hand… sign me up. 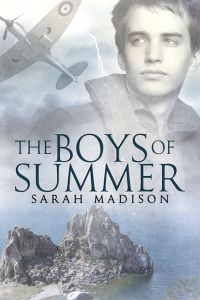 My newest release is a story of lost love and recognizing the need to grab your chance while you can, which strikes me as kind of appropriate right now. The Boys of Summer is available from Dreamspinner Press. If you like a chance to win an e-copy of The Boys of Summer (or alternatively, a story from my backlist), leave a comment. Thanks!

Links in this post: The Boys of Summer: http://tinyurl.com/qxgvgn9

Bio: Sarah Madison is a writer with a big dog, an even bigger horse, too many cats, and a very patient boyfriend. She is a terrible cook, and concedes that her life would be easier if Purina made People Chow. She writes because it is cheaper than therapy.

Jan 01: RJ Scott on her inspiration for a new series in 2016.
Jan 01: Temple Dragon on giving for free during December.
Jan 02: Chrissy Munder on an author’s passion for paper planners.
Jan 03: Meredith Russell on inspirational cop series.
Jan 04: Becky Black on her five-year anniversary as an author.
Jan 05: Alexa Milne on characters stepping outside their comfort zone.
Jan 06: Sandra Lindsey on her dancing shoes challenge.
Jan 07: Anne Barwell on her WWII trilogy at Dreamspinner Press.
Jan 08: Elin Gregory on reviews – past, present and future.
Jan 09: Eli Easton on mature heroes and our life choices.
Jan 10: Julie Moffett on the geek in us all.
Jan 11: Jaime Samms and the rewards of an online life.
Jan 12: LC Chase on paying kindness forward.
Jan 12: EM Lynley on the recipes that add taste to her books.
Jan 13: Nicki J Markus on falling in love with her characters.
Jan 14: Vicktor Alexander on giving thanks to friends and fans.
Jan 16: Joanna Chambers on the spark of joy from reading and writing romance.
Jan 17: Jordan Castillo Price on esteem-building new year do-overs.
Jan 18: Lillian Francis on deciding on when to come to an end.
Jan 18: Hunter Frost on a Top Ten new anthology.
Jan 19: Lily Harlem on hot fiction and cool drinks.
Jan 19: Liam Livings on how writing is like ski-ing.
Jan 20: JL Merrow on being a boot-aholic.
Jan 21: Paul Alan Fahey on growing up gay in the 1950/60s.
Jan 22: Mickie B Ashling on her new period novel set in Pakistan.
Jan 22: BJ Sheppard on his new cover services business.
Jan 23: Aimee Brissay on her publishing plans for 2016.