From Jordan Castillo Price: (why don’t you subscribe to her newsletter right NOW! and get all these exclusive snippets even earlier *g*)

Did you get to see the interviews I did with Rhys Ford, Charlie Cochet and Jordan L. Hawk a couple weeks ago? Find them here! And now for three more fantabulous fantasy authors… 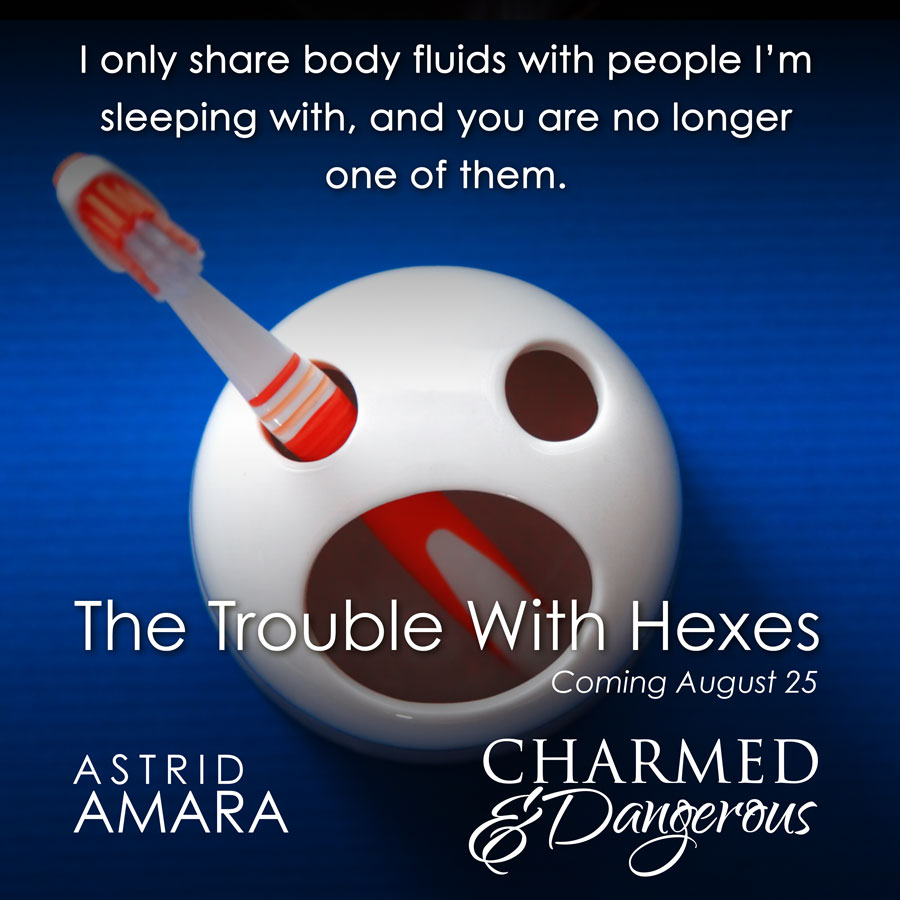 I’m so jazzed Astrid Amara could be a part of the anthology because I was positively haunted by the protagonist in her Irregulars story No Life But This, and her stunning characterization resulted in a nice beefy anchor piece to finish off Charmed and Dangerous and reinforce my assertion that novellas can indeed be satisfying reads.

Hi, Astrid! When I first read The Trouble with Hexes, your leading men Vincent and Tim felt so concrete and well rounded to me, I thought they were existing characters from a series I didn’t know about. How do you convey nuanced character in a brand new novella-length story?

Of course it helps to have a clear idea of the kind of character you wish to convey. I wanted a smart ass PI who is a softie at heart, and an artistic, sensitive guy who is trying to hide his hurt.  And because they knew each other beforehand, they could have a kind of natural banter that helps establish the characters.
Tim and Vincent are an ex-couple, and they’re both still smarting from their breakup. What influenced you to approach their relationship in that way, rather than having two characters meet for the first time on-page?
I think its always easier (and maybe a bit of a cheat) to start off a romance with characters that already have history – they don’t have that whole awkward “getting to know you” part of the story, they already know each other so well. I prefer characters with background when trying to keep a story short. Which clearly did not work in this case, ha!
I can’t help but mention the fact that I suggested a 5- or 10,000-word story and you sent me a 30,000-word behemoth! (And I was in heaven!) Are you a fast writer or was this story just itching to be told? What’s your writing routine like?
THIS story (and its absurd length) is the product of record snowfalls on the east coast. I was at a work conference in Portland Maine at the start of March and all flights home to Seattle were cancelled, and I couldn’t get another flight home for four DAYS. As a result, I was trapped in a hotel room in Portland for four days with negative 20 degrees outside, about $30 in cash, and nothing else to do. This story started as a novella and really took off there, and so I blame the length entirely on Maine.
NORMALLY I write in spurts – I won’t touch a story for two weeks and then go on a binge and thousands of words a day. My schedule has definitely slowed in the last few years – having adopted several lap dogs, I no longer can write at home, it’s just too hard to have a laptop and lapdog vying for my attention. So now I have to schedule specific writing times out at coffee shops a few times a week to get manuscripts done.
If I love a story, it just flows. And this one did. 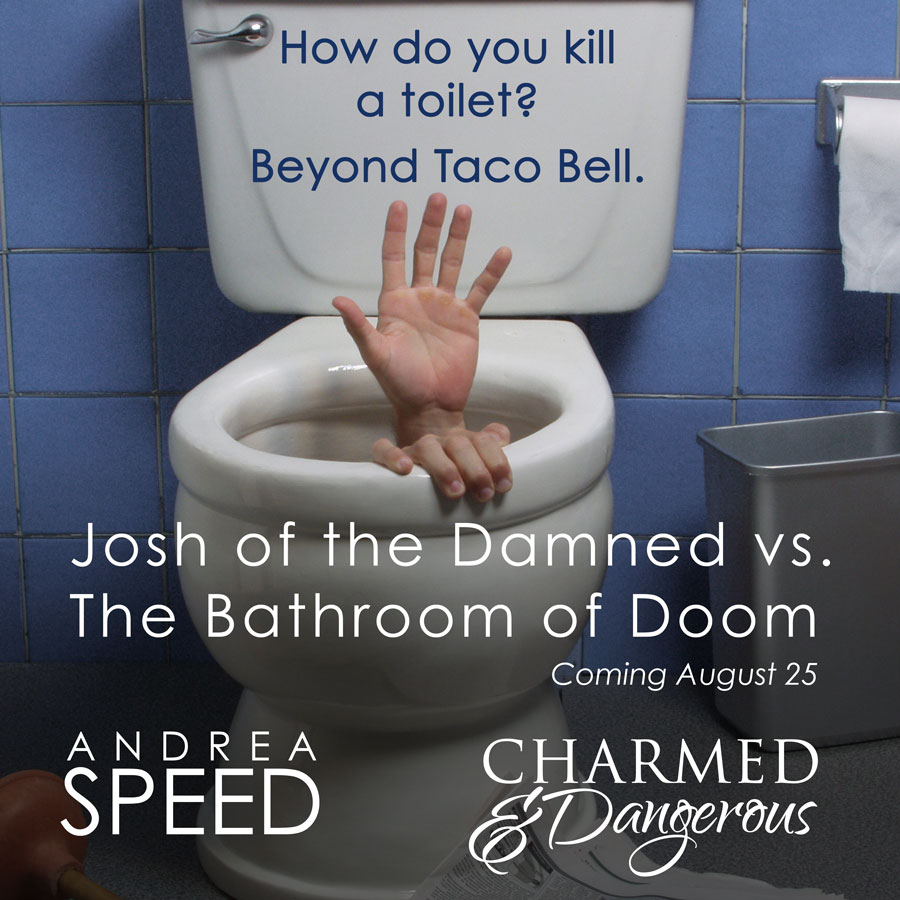 I was absolutely thrilled when Andrea Speed said she could contribute a Josh of the Damned story to the Charmed and Dangerous anthology! This horror/comedy series is unlike anything else I’ve read in the genre, and I absolutely love that I can’t pin any expectations on what the heck is going to happen next. So I don’t—I just sit back and enjoy the ride!
Andrea, do you have trouble classifying your writing in a particular genre? If you could make up a new category to reign over, what would it be?
Oh yeah, I’m never sure what genre my stuff belongs in. I like throwing them all in a bucket and seeing what happens. I love so many genres, from mystery to horror to science fiction to comedy and action thrillers, I have a hard time pulling them apart. As for what I’d call it … I don’t know. Genrebending? Neo-freak out? Strangecore? Punkenstein?
Josh is a particularly convincing convenience store clerk. What inspired that job choice? Have you held any particular jobs that helped you write the Quick-Mart with such flair, or is it all just from your experience as a customer?
Oh dear me no. I’d be a terrible clerk. I can barely interact with people I know; interacting all the time with strangers would push me to the breaking point. Truthfully, I sat down and thought of what profession I would consider hell, and the midnight convenience store clerk was the first thing that popped into my head. (My sister did work in a convenience store for a while. This did not influence my thought that it was hell, but my understanding is it wasn’t fun.)
And finally, I’d love to hear more about your writing process. Walk us through what happens from your moment of inspiration through “the end.”
The funny thing is it depends on the story. I don’t have one consistent process, which may or may not show. Sometimes I’ll have an idea that occurs to me as a random thought in the bath, or when I’m half-asleep, or sometimes I’ll read something and think “What if ..?” Then I just sit down and write, and see what happens. Usually I’m pretty lucky, as the characters are just there, and hardly need me to do anything but transcribe. They have a good idea of what’s supposed to happen, even if I sometimes lose the plot. They know where we’re going. And when they say we’re done, I’m done. 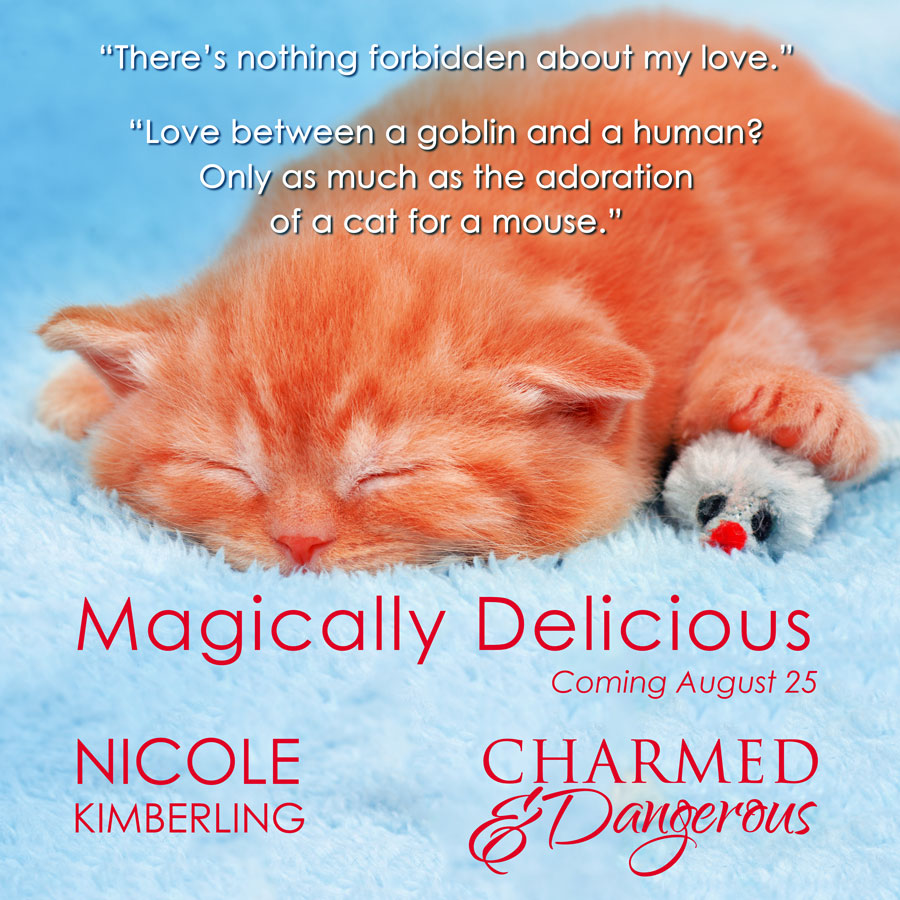 I’m super stoked to chat with Nicole Kimberling today! Not only is Nicole a Lambda award winning author, but she’s the editor of Blind Eye Books. I was tickled pink she was able to contribute to Charmed and Dangerous.

Magically Delicious is a sequel to the Irregulars story Cherries Worth Getting. Not only does it stand alone perfectly, it also doesn’t spoil the first story, for anyone who might read them out of order. I was over the moon when you told me you’d be visiting Keith and Gunther again because I loved their first escapade. Nicole, had you been considering a follow-up for a while, or did the idea for another story flood you all at once?

I had been considering revisiting Keith and Gunther for ages, but I hadn’t managed to find a solid idea for it. Plus I knew I wanted to write a shorter piece to give an additional glimpse into life beyond the end of the first story, Cherries Worth Getting. So for me this anthology came along just at the right time.

Keith Curry is an everyman among an assortment of magical beings. Not only does he lack magic powers of his own, but at one point in the story, he even has his weapon taken away. What appeals to you about writing from the mundane character’s point of view in a magical setting?

Well, first I think that his lack of fancy powers makes him more approachable and relatable as a main character. I think everybody has, at one point or other, felt like everybody else was outshining them, you know? Keith feels that way all the time. But does he run home crying? No. He just keeps fighting because that’s the kind of guy he is. And from a narrative standpoint, having a main character with no extra-human powers raises the tension and stakes because he’s always at a disadvantage when dealing with any magical creature at all—particularly his boyfriend!

When I read your work, I always feel like there are themes supporting it beneath all the characterization and magic and clever dialog and comedy, a really sturdy yet subtle structure that no one ever really notices because it just does its job. What were you thinking about thematically when you were working on Magically Delicious?

Aw, thanks Jordan! In fact, I am completely incapable of writing a story if I can’t develop an underlying theme. Largely I think this is because without a unifying idea I have too many options. In Magically Delicious I was thinking about families—specifically parents and children. So scenes like the family dinner naturally emerged from that notion, as well as Carrot Beard the leprechaun masquerading as Keith’s son. I like to arrange the scenes so that the characters can think about and discuss an issue. It gives the story cohesion as well as providing the characters with non-expository, yet still relevant thoughts. To me it helps to enrich the characters.

Six authors down and three to go. Stay tuned for more Charmed and Dangerous interviews! And if you’re curious about my approach and process, check out Santino Hassell’s fantastic in-depth talk with me at Binge On Books.